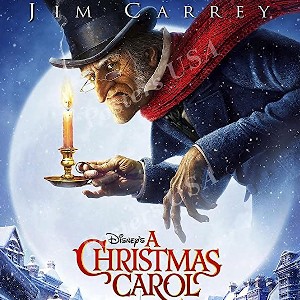 So Many Retellings Of A Short Story

I’m going to luxuriate in the knowledge that I’ll be talking about a story that is nearly two centuries old and, therefore, will be paying no heed to the usual dread spectre that is the spoiler. Ahhh… that’s better. A bit like taking off a particularly uncomfortable pair of shoes.


So… miserable miser makes life hard for everyone around him. Christmas Eve is happening around him, despite his best efforts to ignore it, until he is visited by a series of ghosts who show him his past, present, and potential, future. Glory be! He sees the error of his ways and sets about making amends to everyone he’s upset.

A Christmas Carol or: A Christmas Carol. In Prose. Being a Ghost Story of Christmas to give it its full, original title was written in October 1843, mainly because Dickens was suffering from financial problems. To say it became a timeless classic is a bit of an understatement. Actually, to be more accurate, it became an instant classic and stayed that way. Not bad for an eightyish page novella.

It was originally published on 19th December 1843 and the first edition had sold out before Christmas Eve had rolled round. By the end of the following year there had been legitimate thirteen editions released, and it was also being bootlegged! This meant that the financially diminished Mr. Dickens was making even less money than before. As a result, he did something that authors have been doing ever since… the book tour. Back in those days, it was more a case of a public reading rather than a talk about the book, but they proved very popular. From the start in 1849 he carried on the readings, until he died in 1870.

Since then, A Christmas Carol has been performed regularly and in a variety of formats; theatre, cinema, TV, radio, opera — even graphic novels. If Dickens were still around and collecting royalties, he’d be giving Bill Gates and Jeff Bezos a run for their money, let alone JK Rowling and Stephen King.

Fortunately, the nature of RunPee means that I can narrow the field and just concentrate on the filmed versions which, apart from two, were called either A Christmas Carol, Scrooge, or a slight variation of the two. For those desperate to know, the other two were The Right To Be Happy (1916) and the Spanish Leyenda de Navidad (1947)

Reflect Upon Your Present Blessings

The oldest surviving version is 1901’s Scrooge, or Marley’s Ghost, which ran to a shade under six and a half minutes. The first American version, A Christmas Carol (1908), with Thomas Ricketts as Scrooge, is now lost. There were another couple of short versions before the first feature length version; the aforementioned The Right To Be Happy (1916), which is also listed as lost.

There are other versions, but if I were to comment on every one of them then this article would be longer than the original source material. Instead I’ll concentrate on a couple that I particularly like, the first one being 1951’s Scrooge or, as it’s known in the USA A Christmas Carol.

For me, this is the definitive version. Alastair Sim is magnificent as Ebenezer Scrooge. His naturally lugubrious face is perfect for the unrepentant Ebenezer, but still manages to light up when Christmas Day dawns and he realises that he has a second chance. He also shows off a classic pair of skinny old man legs when he dances around in relief. For people of my age group, who grew up in the sixties, there is a plethora of British talent on display… Michael Hordern, George Cole, Hattie Jacques, Patrick Macnee, and Peter Bull were rarely off the TV when I was a child. To my eye there’s only one mistake, and that is in the casting of Glyn Dearman as Tiny Tim; the character is supposed to be about seven years old, chronically ill, and malnourished — the actor is too strapping a lad to get away with that conceit!

Incidentally… young Scrooge and Marley are played by George Cole and Patrick Macnee and they both died within six weeks of each other in 2015.

There’s More Of Gravy Than Of Grave About You

Although I’ve managed to avoid mentioning it so far, as well as the twenty one live action versions, there are also seven animated versions, and one of those is my next favourite — the 2009 Robert Zemeckis motion capture animated version, A Christmas Carol. Whether it was intentional or sub-conscious, but I can’t help but see Jim Carrey’s performance and think of Alastair Sim… maybe that’s why it’s my second favourite version. Similar to the 1951 version, there is an abundance of British talent including Gary Oldman, Bob Hoskins, Colin Firth, and Lesley Manville.

Then there are the slightly eccentric versions… The Muppets Christmas Carol, Mickey’s Christmas Carol, and Scrooged all play with the story to a greater or lesser extent, and that’s before you run into the TV versions… Carry On, Bugs Bunny, The Flintstones, and Blackadder have all had a go at the story.

Patrick Stewart managed an entire one man Broadway show on this tale, and everyone should try to find a copy of that.

And somehow I don’t think we’ve heard the last of it yet. As Tiny Tim (who was nearly called Little Larry, Puny Pete, or Small Sam) might say…

Gawd bless us, everyone.

Virgin Movie Review – Magic Stocking (half of it, maybe)

chevron_left Is there anything extra during the end credits of Half Brothers?
A US Classic From A UK Perspective – A Christmas Story chevron_right