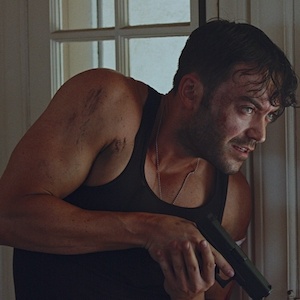 The Handler is a fairly typical tale of a good guy who finds himself down on his luck and turns to crime. After a while, he decides that he wants to go back to clean living and leave the aforementioned life of crime behind him. Unfortunately, the big boss either knows that he’s the best man on the staff or gets offended by somebody wanting to leave. Whichever it is he sends a small army of people around to either change his mind or to, permanently, terminate his contract.

In this case the good man is former marine Ryker Dune (Chris Levine) and the big bad boss is Vinnie Fiore (Michael Pashan). Vinnie lets Ryker know that he knows a lot about his family and friends and, if he doesn’t comply, the insinuation is that they may well be in for a spot of bother. And those few sentences are all that was needed for an hour and a half of violence and mayhem. To be honest there wasn’t a lot else and while other films have pulled off a non stop stream of violence they tend to be very well choreographed and usually from the Far East.


In The Midst Of Chaos, There Is Also Opportunity

So how did The Handler, err, handle the task? Sadly, not very well. There seemed to be a certain amount of messing around with the timeline but not in a way that allowed you to make sense of things. There is a MacGuffin in the form of a black plastic bin bag. We’re never told what is in the bag; is it a stack of used fivers? A horse’s head? The boss’s favourite puppy? Who knows! And, ultimately, it doesn’t matter. All you need to know is that it is important to both our hero and the big bad.

And herein lies another source of confusion… what is our hero fighting for and/or against?  Is it to return to being a law abiding citizen? Is the fight being brought to him by a violent crime lord trying to save face and exercise his authority? Is it just because he doesn’t want to share whatever’s in the bag? Take your pick, it could be any or all of those. Whatever it is, it is enough for Vinnie to send all his chaps in to face Ryker with typically brutal results. Oh…apparently there is someone featured who is famous on YouTube but, as I rarely watch it, I didn’t notice who it was.

Who Wishes To Fight Must First Count The Cost

The Handler is one of those films that has you scratching your head and not in a Christopher Nolan, puzzle-solving way. Unfortunately, it is in more of a “What are they doing?” or “Did nobody check that?” sort of way. Did the hero, an experienced veteran, actually try and hide behind a glass door? Worse yet…did he just get away with it? Vinnie makes the mistake that all cinematic bad guys do and sends his troops in dribs and drabs allowing them to get picked off and whittling down his resources. Until you get the final head scratching ending. Spoilers prevent me from saying anything other than you will look at it and think “Really? You want me to believe that?”

Now I know that corners have to be cut in the low-budget world of indie film making so I’m usually happy to not only cut some slack but actually be appreciative of cost-cutting measures like copying an Apple TV screen saver rather than hiring a drone. However, the effects were a bit hit and miss; I’ve never seen anyone actually get shot so I don’t know if the pink mist is an actual thing or just an effect that is now affordable but The Handler used it a lot. To be fair though it wasn’t too bad provided you didn’t try and take things too seriously. Oh yes! There were appearances by the two stars of one of the first films I actually reviewed which gave me an excuse to have another look at it; if you can find Wives Of The Skies I recommend you investing the twenty minutes this short film takes to watch.