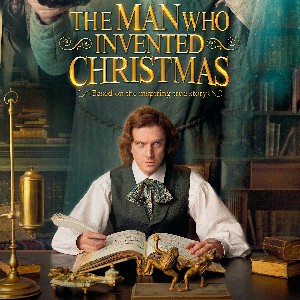 A lot of what we now think of as Christmas traditions going back centuries actually started out as little more than whims of fashion — many of which are less than two hundred years old. The Man Who Invented Christmas tells the story of some of those fashions. When Dickens wrote A Christmas Carol there wasn’t really a holiday to start with. The line about, and I paraphrase, Christmas Day being an excuse to pick a man’s pocket every 25th December, was an example of the rule rather than the exception, as few businesses even considered it a holiday. So, while he is the archetypical anti-hero, a real life Ebenezer Scrooge would not have seemed out of the ordinary by expecting Bob Cratchit to work on the day — and resenting having to pay him to boot!

The Man Who Invented Christmas tells the story of how and why Charles Dickens wrote A Christmas Carol. A lot of what is shown is, most probably, a fictional account; there are truths in there, but not everything happened. The opening scene of Dickens being feted almost like a latter day Justin Beiber (but with talent) is, although fictionalised, actually true. The man was a superstar.


Imagine, if you will, someone who had the imagination and ability to tell a story like an amalgamation of Terry Pratchett, Christopher Nolan, JK Rowling, Quentin Tarantino, and whoever else your favourite writers and directors might be… THAT was Charles Dickens.

Whenever we think of Dickens nowadays, my bet is that the first experience is a sinking of the stomach as a huge tome landed on your school desk with a sickening thud. It tended to be a book that you could put down your jumper and would stop a stray javelin as you wandered across the field.

But, in the main, that wasn’t how it happened for the fans of Dickens in the mid 19th century. For them it was more like waiting for the next episode of your favourite soap opera. The Pickwick Papers was Dickens’ first novel, but it was originally published monthly over twenty months.

Similarly, Oliver Twist and Nicholas Nickleby were serialised monthly, while The Old Curiosity Shop and Barnaby Rudge were printed in weekly instalments. In fact, A Christmas Carol was the first novel to be sold as a whole book. Mind you… it is only about ninety pages long.

Other things that are correct in the script — Dickens was struggling with debt following disputes with his publishers due to poor sales of Martin Chuzzlewit; a young Charles did have to go and work in a factory when his father was taken to debtors’ gaol; Dickens was concerned with the plight of the poor in general and their children in particular; financial difficulties were about to be made worse by an imminent new arrival; and there was a family raven called Grip. Much harder to say is how true the creative process is being represented…

Ask No Questions And You’ll Be Told No Lies

The Man Who Invented Christmas starts with a near perfect illustration of writer’s block. After his triumphant reception in America following the success of Oliver Twist, and the failure of his next three books, Dickens (Dan Stevens) sits at his desk and eagerly picks up his quill. Expectantly, his hand hovers over the page. And hovers… and hovers.

Finally the surface tension gives way, and a drop of ink falls to the paper. Off he sets with his agent (if they were called that then), John Forster (Justin Edwards), to have the falling out with the publishers where there is news of his wastrel father John (the always brilliant Jonathan Pryce) being back and after money.

From then on it’s a story of how the story was written. It feels like everybody he meets is quoting A Christmas Carol back at him, but it’s trying to say Dickens was a keen observer of the society and attitudes around him — which is what made the story resonate so well and for so long. One exception to this is Thackeray, as in William Makepeace, played by the ever amusing Miles Jupp as some sort of gloating/sympathetic faux friend, lamenting his awful reviews but still managing to quote each one perfectly. In actuality, Thackeray and Dickens were on good terms at the time, though they did fall out later on.

All in all, if you are a fan of A Christmas Carol or Scrooge then you’ll enjoy The Man Who Invented Christmas.

Virgin Movie Review – Magic Stocking (half of it, maybe)