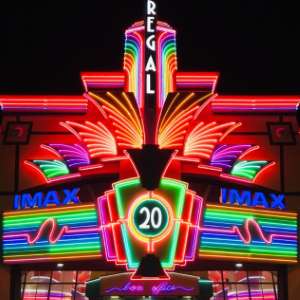 I don’t know if anyone’s noticed, but there’s been a bit of a hiccough vis-à-vis watching films in the cinema for the last five months or so in that, well, there haven’t been any!

Once COVID-19 started getting serious, the cinemas were closed down for the good of public health and safety, along with anything else deemed not vital to the ongoing needs — rather than wants — of society. So, amongst other things, I haven’t had a hair cut in over six months, but I’m not too dismayed by my long flowing locks… just my not-so subtle way of saying I’m of retirement age but still have all my own hair.


Some people were moaning about being stuck at home. I guess I was fortunate in that I quite like my wife and family, and was happy as a pig in muck only wearing pyjamas from the end of March until sometime last week. I actually managed to maintain something approaching normality by not starting drinking until, at least, five in the evening… most days.

I was fortunate in that my wife works in education and her school was open for the children of essential workers. So she had to go out occasionally anyway, and we came to the agreement where I planned and made shopping lists for what we needed, she went out and bought stuff, and I cooked it all.

But then things started to relax.

Most of the concert tickets I had booked had been re-scheduled for next year, but the one for an evening of seventies Dutch prog rock is still hanging on to the original mid November date!

Then the big news came… I heard that cinemas in general — and my local one in particular — were re-opening. That’s when I decided that I had to bite the bullet, buy a mask, and get out into the real world before the agoraphobia really took hold.

And tonight was the night!

I got some free tickets for a preview screening and thought I’d dip my toe back into the water that is cinema-going. Oh… and call it a date night as a treat for the current Mrs. Williams.

Well, I’ll be honest and say it was definitely different, but then, I assume, it’s supposed to be. It’s the longest period of my life since the early ‘60s that I’ve gone without walking into a cinema and watching a film. I was excited and a bit nervous: full disclosure, I’m on some medication which means I can get out and about, but at the expense of my immune system.

It might just be me being selfish, but I can’t help but notice the number of people not wearing masks. It’s a bit unsettling to say the least, but I have managed to resist the temptation to walk up and just ask why. At least my selfishness means I’ve got myself properly masked up and sanitised so, fingers crossed, I should be OK. One way to find out…

Maybe my extended pyjama days didn’t do me any favours after all.

Despite all my internal ranting at people not following the mask rules, I noticed I was doing a passable Mr. Bean impersonation by making an arse of myself when it came to the newly installed one-way systems, and forgetting to stay two metres away from strangers… and that was just in Starbucks, getting a coffee beforehand.

So how has the cinema going experience changed?

Obviously, I can only speak about the measures taken in my local theater, but I should imagine similar steps are being taken elsewhere.

The changes started before I’d actually got into the place. Previously there had been a main entrance and exit combined, and a rarely used doorway into the bar that was only ever opened on hot days to let a bit of air through.

Now the main entrance is the exit and you have to come in through the bar. They’re still sorting things out, having only been open for a few days, but they haven’t yet sorted out how to separate the people who’ve booked online and have their virtual tickets, and the others who are stood in line, scratching their heads, wondering which film they want to see, and whether they want their actual body weight in popcorn (or just a leg’s worth).

I’d just decided to walk around the outside of the barrier and was trying to convince my wife to follow me straight past the queue, when a member of staff appeared and called for everyone with tickets to go straight through.

In the foyer was a sad sight… an empty pick and mix stand.

For years they have been the premier cru of germ warfare; little fingers that somehow manage to be wet yet sticky, riffling through the different containers. A jelly baby here, a chocolate mouse there, surreptitiously returning a piece of toffee that tasted fine but was a bit too hard. Then there are the conscientious kids who picked up and put back all the sweeties they’d dropped on the floor, regardless of whether they’d trodden on them or not. How these things were still allowed before Plague 2.0 beggars belief, so I guess there is at least one benefit to it all… besides the dolphins swimming up the Mersey and all.

The thing that got me was why do they bother putting stickers on the floor to remind people to stay two metres apart but, at the same time, herd people into spaces way too small to allow social distancing? So everyone is trying to queue sensibly to get into the actual studio, but it’s taking a bit longer as the new distancing rules have to be explained to everyone. Meanwhile the escalator is still pushing people into the back of everyone waiting.

I suppose that this showing was an exception in that it wasn’t a ticketed screening; invites were sent out and you just sat where there was space, rather than controlled when you booked.

So how was the spacing handled?

The theory was that only every other row was used, and there had to be a seat left empty between customers who weren’t from the same household.

Whether this is properly enforced with properly ticketed screenings I’ve yet to see, but the staff were obviously caught unawares by the take up. I suppose there are usually a number who say they’ll come but change their minds at the last minute, but they underestimated the pulling power of Timothy Spall! As a result, there was some encroachment into the supposedly empty alternate rows; I didn’t realize a guy sat directly behind me until the lights came back on at the end of the showing.

So… I’d made it back out into the real world and into the artificial world that is the cinema. I’ll be honest and say that I wanted to feel relaxed, happy, and confident all the time but, alas, that wasn’t to be.

As I said, there were circumstances that made this an atypical experience, so I will be going again this week, and as seating will be monitored via the computerised booking system, there shouldn’t be any unexpected crowding. Having said that, cinemas aren’t designed to allow people to get into their rows and along to their seats AND maintain a two metre gap, so there’s no way you can go and be 100% risk free.

I can only speak personally, but my opinion is that there is no hot ticket blockbuster that has been made, or ever will be made, that could encourage me into a cinema if it wasn’t reasonably safe to do so.

I speak as a film fan of long standing who is usually there for the first showing for most films. I’m usually there at ten o’clock in the morning; it’s the still-fresh taste of toothpaste that cured me of my popcorn addiction. But even if Quentin Tarantino directed a MCU vs DCEU vs James Bond mega mash up multi billion dollar, finely scripted, brilliantly acted, and beautifully shot roaring success of film, I wouldn’t be going to see it if my local area was in a coronavirus hotspot. I might live for film, I’m not sure I’m ready to die for it. Let’s face it… watching films at home might not be as good as in the cinema, but a decent sized screen and a good sound bar (even the affordable under $300 options on this page) go a long way to make up for being on a ventilator.

As it is, I’m wondering if every tickly cough and wheezing chest noise is significant, but the alternative is to grow a long beard and never leave the house.

I try not to be overly dramatic, but my grandchildren both have their birthdays in September and I’m being unusually generous this year. I have to admit that it’s partly because I wonder if I’ll see another one.

Contagion predictions eerily true about the pandemic…what about the next stage?

chevron_left Movie Review – About Time (2013)
Is there anything extra during the end credits of The New Mutants? chevron_right