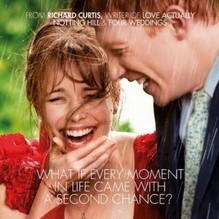 It’s not a Groundhog Day movie

About Time has time travel in it. Let’s get that out of the way. And while on the surface it seems to feature a Groundhog temporal loop, it doesn’t.

The young man in question (a sincere, naive Domhnall Gleeson) can go back in time and fix things as often as he wants, but he’s not stuck in an endless day. His life keeps trucking on in linear fashion, with occasional (and sometimes frequent) forays into the past to change things to his liking. Or try to.

How enjoyable the story is depends on what genre About Time lands in. The protagonist isn’t a superhero or a Mutant. He’s not someone who has to figure out a plot MacGuffin in order to restart time, stop a train from blowing up, or learn who murdered them. It is exactly none of those things. My vote for the genre for About Time — it’s a common, low-stakes drama about navigating the ups and downs of early adulthood.


In fact, I have two things to say about the plot:

From my dueling points above, one could guess I didn’t like About Time very much. That assumption is only partly true. This isn’t a Groundhog Day Loop and it doesn’t quality as sci-fi or fantasy, or even as a supernatural thriller. It is LITERALLY about a young man meeting a girl and making a family. It’s all so….normal.

I love weird genre stuff and I’m the resident expert on all things Groundhoggy. My expectations were higher.

Bill Nighy — whom I adore — plays his usual charming curmudgeon self with less energy than usual. He did his thing far better in Love, Actually, Hitchhiker’s Guide to the Galaxy, and Shaun of the Dead. Nighy might get more animated with a wackier script than this. Given the premise, he probably thought this would be right up his alley.

Grading About Time is a messy thing

About Time is a fluffy, sentimental little B drama.

But it’s a failure as a time travel story. What I’m trying to determine is whether that’s on purpose or not.

We’re all time travelers in a way (forward in life, backwards in memory), playing our small-stakes lives on a tragi-pleasant stage. About Time Writer/Director Richard Curtis might have been pushing for mundane normalcy as the result of it all, even with an ability to control time. That with great power, sometimes you get nothing much at all.

If so, the point is buried. I don’t know if About Time is clever enough to have a subtext. But it’s a nice dramatic tale if you don’t expect too much loopy goodness.

chevron_left Movie Review – Tenet
Back To the Movies We Go: Once more unto the breach! chevron_right