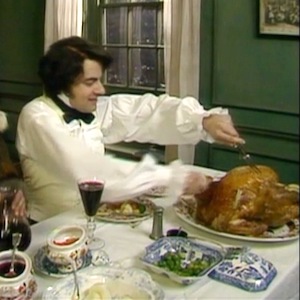 I know that a lot of people outside of the UK only think of Mr Bean when they hear of Rowan Atkinson but, trust me, he is far funnier than that character. As has been alluded to many times, I am getting on a bit and can remember him in Not The Nine O’Clock News back when it started in the late seventies. I also remember watching The Black Adder struggle through the first and only series but have loved the following three iterations.

It has become a bit of a sign that you’ve “made it” in British TV comedy when you are given a Christmas special. I am of an age that remembers excitedly buying the Christmas special editions of the Radio Times and the TV Times. These were always extra thick, fortnight specials covering Christmas and the New Year. First job was always flicking through to see what holiday specials were lined up.


From 1969 to 1977 the Morecambe and Wise Christmas Show was the highlight of Christmas night viewing for millions of viewers…literally millions. It is sobering to think that, at their peak in 1977, over 28 million British families sat down and watched Eric and Ern do their stuff. Sadly, for unknown reasons (money probably) in 1978 they moved to a commercial TV channel and never hit the same heights again.

No Goose For Tiny Tom This Year

Blackadder’s Christmas Carol is one of those mixtures. Running to forty three minutes rather than the usual shade under half hour.  It is an, almost, complete stand alone. It was released, and fits in chronologically, between Blackadder the Third and Blackadder Goes Forth. All the usual cast are there; sometimes in known roles and other times indifferent ones.Once again we see Stephen Fry as Melchett, Hugh Laurie as Prince George, Miranda Richardson as Queen Elizabeth, and Patsy Byrne as Nursie.

After their turn in an episode of The Black Adder, Miriam Margolyes and Jim Broadbent are reunited to play Victoria and Albert. A new face is Nicola Bryant in her first role after leaving the cast of Doctor Who where she played his assistant, Peri. Also there is Robbie Coltrane as the Spirit of Christmas looking startling like Hagrid from the Harry Potter films. JK Rowling said she always envisioned Coltrane as Hagrid…I wonder why?

Tiny Tom Is Fifteen Stone And Built Like A Brick Privy

But, most importantly for us here and now, the script is a pastiche of A Christmas Carol  and is set in the Victorian era, contemporaneous with the original novel. It centres around Ebenezer Blackadder (Rowan Atkinson) who is the proprietor of a moustache shop in London. He lives and works with his assistant/servant Mr Baldrick (Tony Robinson).

From outside the shop we hear Blackadder repeatedly shouting “humbug”. He enters the shop, proffers a paper bag, and says “Humbug Mr Baldrick?”  For, in this telling of the story, Ebenezer Blackadder (Incidentally, this is the only time that the Blackadder character isn’t named Edmund) is the kindest, most considerate, most generous man in England.

As is the way of the world, everybody knows of his generosity and everyone takes advantage of it. At the start Blackadder and Baldrick have all they need to celebrate a modest Christmas; presents, turkey, nuts, and a few pounds in cash. Before bed time the locals have swooped in and stripped everything away.

Blackadder goes to bed and is visited by the ghostly Spirit of Christmas (Robbie Coltrane); only one spectre for this adaptation but we don’t miss much. As is usual Blackadder is shown visions of his past and future lives. This time he sees that his bad guy family are in a much better state than the one he is.

Apart from Ebenezer, all the other characters are as they appeared in the last two Blackadder series. Baldrick is as famously stupid as ever; he is writing a Christmas card. Blackadder notices that he has spelt Christmas without managing to get a single letter right. If you’re interested he spells it “Kweznuz”.

Blackadder’s Christmas Carol gets regular seasonal screenings and is available in a variety of formats. If you haven’t seen it then I recommend you take a look. t’s as funny as any of the Curtis/Elton Blackadder scripts despite one cut line. After Baldrick tells of the nativity that was put on using a dog as Jesus, Blackadder asks if the audience were in mourning.Baldrick’s reply “They want us to do another one at Easter – they want to see us nail up the dog” was cut after the first showing.