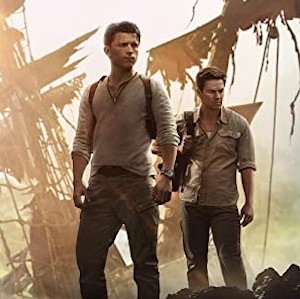 Cute, cute, cute. Stir together several heapings of The Goonies, Pirates of the Caribbean, and Raiders of the Lost Ark, fold in Tom Holland’s Spidey-like chattiness, and Uncharted is a tasty treat hitting the theaters right now. Indiana Jones is personally name-dropped, because, how could it NOT be, when the leads are crawling around ancient booby-trapped dungeons?

B+? Is Uncharted really that good?

Upon further thought, a B+ might be too high a grade. It’s a solid little B story, but I was so unexpectedly delighted — a rare thing in this modern world — that I’m happy to give Tom Holland and Mark Wahlberg the extra plus. The opening scene is a great example of In Media Res — and as a bonus, if you miss the beginning, the same scene comes around again (it makes a lot more sense after the events have unfurled, but you won’t be lost if you’re running late. Just keep an eye on the red sportscar).


Since Uncharted is packed with clues and misdirects, I highly recommend setting your phone to the RunPee app when you go to the movies so you know when it’s time to pee and stick to those. I saw a lot of people get up and go in moments that turned out to be important.

This is a fun, leave-your-brains-on-the-floor adventure film; there are flying pirate ships (note: this is NOT a fantasy movie), ancient treasure maps, Da Vinci Code clues, free fall fights, witty banter, and a sweetly nostalgic sense of awe.

Tom Holland does a quality job being “Spider-Man Does a Thriller,” which works here, but I’m not sure how long Holland will be pulling off these beta-male ingenue roles. If he can make like early Tom Cruise and act beside the best in the business, I think he’ll grow in the craft. I can’t tell if Holland is a versatile actor at this point.

In the meantime, Mark Walhberg comes across as a B-lister next to Holland’s A-list cute charm. The buddy chemistry is fine; nothing to write home about.

The thing to know about Uncharted: it has the nostalgic feels the world needs right now. If you enter with that mindset, and if you like a simple adventure yarn, this crowd-pleaser is worth the price of admission.

About The Peetimes: This is was a hard movie to get Peetimes for because of all the interesting treasure-hunting clues and outlandish, enjoyable, fun action. Try to use the 2nd Peetime, but use at least the 1st or 2nd. The 3rd and 4th Peetimes are for emergencies. You don’t want to miss the great sequences in the last part of this fun movie.

There are extra scenes during, or after, the end credits of Uncharted. (What we mean by Anything Extra.)

Plot
A descendant of explorer Sir Francis Drake, a treasure hunter named Nathan Drake believes he has learned the whereabouts of El Dorado, the fabled South American golden city, from a cursed golden statue. The search becomes competitive when a rival hunter joins the fray.