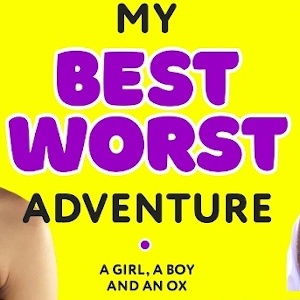 My Best Worst Adventure is a story that’s been told before; a troubled teen is sent away and realises that things can actually be worse… but then, somehow, get better.  In this case the troubled teen is Jenny (Lily Patra), who refuses to speak since the death of her mother. Her step-father Mark (Eoin O’Brien) sends her to stay with her family who live in rural Chonburi Province, Thailand. While there she meets the local heartthrob, Archit (Chinnapat Kitichaivaranggoon), falls out with him, meets the local underdog Boonrod (Pan Rugtawatr) who also doesn’t speak, makes friends with him, and then has various adventures.

So Jenny leaves her life in Los Angeles and, before you know it, she ends up on a bus being offered a deep-fried insect of some sort. Apparently, they are just like prawns but I can’t confirm that one way or another. Mind you, I can’t definitively confirm the culture shock that Jenny experiences but, while I’ve never been to L.A., I have lived in big cities and I know there’s a heck of a difference between town and countryside.


She has all the problems you’d expect a teenager to find insurmountable; problems charging her phone and iPad, dodgy food, peer problems, and buffalo racing.

Who’s Behind The Camera?

The creative force behind My Best Worst Adventure seems to rely a lot on past glories. The writer and director is Joel Soisson, who seems unable to say or write a word about the film without mentioning that he was a producer on Bill & Ted’s Excellent Adventure. I’ve only seen two of the three Bill & Ted films and I have to say that I enjoyed My Best Worst Adventure much more. A quick look through his IMDb page shows that his pedigree is in very different genres to the latest one…

Mr. Soisson has produced, written, or directed films in the following series: Children Of The Corn, Highlander, Hollow Man, Maniac Cop, American Pie, Mimic, The Prophesy, American Yakuza, Dracula 2001, Hellraiser, A Nightmare On Elm Street, and many, many more. Oh… he was also a writer and producer on Piranha 3DD, but that doesn’t get mentioned as much. Mind you, he also worked on the Trekkies and Trekkies 2 documentaries and they don’t get mentioned much either.

And Who’s In Front?

As well as the earlier mentioned characters, there are a few adults involved. The devilishly severe school teacher Ratree (Pattamanat Kunhayothin) does stand out, but the slightly demented aunt and uncle (Pitinun Rugtawatr and Nusorn Panpeng) manage to steal any scene that they’re in. Then there’s Jenny’s grandmother (Phanida Suwansaad), who helps to bring the troubled teen back down to earth.

One thing that I did notice is that back in 2015 Joel Soisson made a film called Buffalo Racer which features a rebellious Thai-American girl, sent to live with relatives in rural Thailand, clashes with an entire village when she befriends a mute peasant boy and inspires him to compete in the annual buffalo race…which sounds very similar to My Best Worst Adventure and definitely has some of the same cast in the same roles, and my knowledge of Thai names prevents me from saying whether Lily Patra and Pan Rugtawatr are actually Lily Bhusadhit-a-nan and Tuchapong Rugtawatr, but they do look similar. Regardless, I’d be interested in tracking down a copy of Buffalo Racer to see how different or similar it is to My Best Worst Adventure.

Is there anything extra during the end credits of Bill & Ted Face the Music?