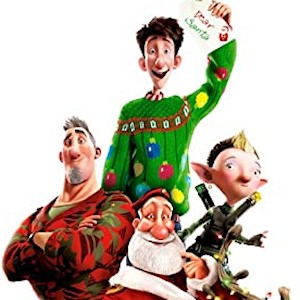 First off, I LOVE Arthur Christmas! It is funny, entertaining, and endlessly re-watchable. The talent on display is awesome and the attention to detail is breathtaking. There are so many little things that you either see for the first time when you watch it, or can point out to other people who haven’t spotted it. It’s a great film for watching alone or in company. And just enough heartstring pulling to make you glad you’d turned the lights down to watch it… unless you don’t care about clubbing like a fool in public!

Arthur Christmas is the story of how the magic of Christmas works.

It’s all down to loads of elves, a huge sleigh-ship, masses of computer power, and meticulous planning. The whole Christmas thing is a family business; GrandSanta has retired, Santa should be joining him soon; Steve is the eldest son and in charge of planning and co-ordination, and youngest son Arthur answers the letters. This year though, despite all the technology, elf power, and planning, a minor mishap occurs, which means that one child gets missed out. If nothing is done she’ll either think she’s been bad, or stop believing in Santa, neither of which, of course, is true — but one miss out of two billion hits isn’t worth worrying about is it??


It’s down to Arthur and GrandSanta to put things right.

You Made It Happen, Lad! No-One Got Left Out!

Then there’s all the little jokes and references… GrandSanta has hidden the original sleigh away in a forgotten workshop that has an “inspirational” poster on the wall saying “Don’t be seen.” Under the workbench is a big syringe labelled “Chimney Lube.” During the delivery of a train set there is a scene where an elf rides a toy train, putting the track down as he goes à la The Wrong Trousers, and there’s a scene when a Shaun The Sheep toy gets mercilessly trodden on. The computer displays and tablets are marked SNOWY with the same typeface as SONY.  And there’s the problem GrandSanta has with his memory when he talks to the reindeer: “Dasher, Dancer, Prancer, John, Bambi, You With The White Ear, and You… and You!”

So Much For Your Brother’s Fancy Pants Technology!

The quality of the animation is amazing, but in one of those “oh, I never noticed that” ways. We’re in Aardman territory but there isn’t a strip of Plasticine (other sticky, smelly modelling media are available) to be seen. This is a computer generated animation: an Aardman Animations/Sony Pictures Animation co-production. But, as can sometimes be the case, the animators haven’t made the characters all shiny and polished… just the opposite. Whilst they are obviously drawn rather than photo-perfect, the characters are made more realistic by having little “inconsistencies” in them.

As well as the usual mapping of how clothes and hair (Santa has about 900,000 individual hairs in his hair and beard) move, there is also an effort to reproduce a cinéma vérité feel for the elf invasion scenes.

It’s shot in a run and gun style with rapid cuts following the action; part of the shooting involved someone with a Steadicam on a treadmill shooting the projected image, so they could get the correct feel for the elves running through the streets and over the roofs. And there’s the little tweak of not making the faces symmetrical, by a wart here or a liver spot there, making everything just that little more life-like.

We’re In The Wrong Trelew!

What surprised me was that there is an actual Trelew in Cornwall! It’s only a hamlet around the corner from Falmouth, but it is there. I guess I was just used to people like Posy Simmonds inventing places like Tresoddit to think that it might have been real. Turns out it’s not far from Treverva, where my Son-In-Law comes from!

Where things break down is the detour to Trelew in Mexico… that one doesn’t exist. But I don’t know why they couldn’t have just changed it to Trelew in Argentina, which is real! There’s also a Mimosa Street in the Argentinian one, thanks to the Welsh emigrants who set up the town of Trelew after they landed in the ship called, yes, Mimosa.

Anyway, that is a very minor niggle in an otherwise gorgeous film.

chevron_left Is there anything extra during the end credits of All My Life?
Rewatch Review – The Man Who Invented Christmas chevron_right