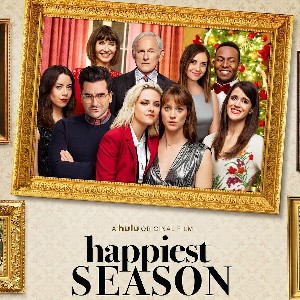 Happiest Season is a Christmas film. I thought I’d better just make that clear given the article elsewhere! Anyway, this is a Christmas film through and through. The essence of it is a couple going away to spend the holidays with one of the families. It’s a fairly standard rom-com where one of the couple is planning on surprising the other with a proposal, and was thinking of going old school and asking the father for permission first.

There’s humour, due to random exes turning up at odd times and throwing various cats amongst differing pigeons. So far, still standard rom-com formula. The difference comes from the fact that the couple are gay. The complication comes from the parents they are visiting not knowing that the two women, Abby (Kristen Stewart) and Harper (Mackenzie Davis), are more than just room-mates. So this throws the whole asking for a hand in marriage thing into disarray.

Obviously I’m not going to say how everything plays out but, let’s be honest, it’s a Christmas rom-com. You don’t need to be Sherlock Holmes to know that there’s going to be a roller coaster of emotions. You’d also have to be James Moriarty to end on anything other than a happy note.

This was a really nice film. Plenty of humour, mainly from Abby’s friend John (Daniel Levy), and much put upon sister Jane (Mary Holland), but the rest of the cast chip in as and when needed. And there was the right amount of emotion too. Maybe it was so grounded and realistic because the writer and director, Clea DuVall, based the story on her own life experiences.

How About Those Performances

I’ll admit to being a bit underwhelmed by the thought of seeing Kristen Stewart in almost anything really, and the only other time I can recall seeing Mackenzie Davis was as cybernetically enhanced soldier Grace in Terminator: Dark Fate, but both actors were great! Add to that a nice turn by Audrey Plaza as one of the exes, Riley; she has really matured since Parks And Recreation.

Gay or straight, this was a fun film which I think could have the legs to be around for a few Christmases to come.

chevron_left Rewatch Review – The Man Who Invented Christmas
CoVid Life: How to use the bathroom in movie theaters chevron_right