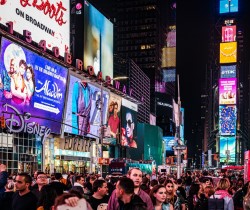 Tend to your need for pure culture during quarantine! There are plenty of classy places to explore from your own living room. Many people in “the industry” are adapting to our world’s new needs, offering including virtual museum visits, live opera and orchestral Zoom events, and now, adding streams of elegant, adored, well-curated Broadway shows. There’s even a free seven day trial to tempt you into expanding your entertainment horizons. The service offers over 300 productions.

BroadwayHD (a streaming service theater fans started in 2015,) says, “BroadwayHD was created with the goal of making high-quality theater accessible to everyone globally.”

What shows are there, you ask? How about the plays with the best casts that you’ve always had in your bucket list, or productions you never could afford to catch before?

Growing up in New York only an hour’s drive from Broadway made me jaded, but these performances are so integrated into our cultural consciousness that missing a FREE FREE FREE (no I don’t get a kickback from them) chance to see Cats in all its glory is not to be missed. There’s a reason the Cats movie bombed. It’s just not meant to be enjoyed in a movie venue. (That’s what makes dog races, if you pardon the awful pun.)


Here’s some of the listed BroadwayHD performances:

…in addition to its pre-existing library of nearly 300 productions, BroadwayHD will be curating two new playlists for anyone hoping to binge-watch some seriously stellar performances.

To honor Women’s History Month, BroadwayHD curated a playlist featuring the works of female theater-makers and show-stopping performances including an all-female Shakespeare Trilogy, along with Lady Day at Emerson’s Bar and Grill, A Night with Janis Joplin, Ann, Driving Ms. Daisy and more.

Even More Goodies, and the Seven-day Free BroadwayHD Trial

Sweet! BroadwayHD also celebrates theater composer Stephen Sondheim for his 90th birthday, as well as Andrew Lloyd Webber’s 72nd, with a special tribute playlist that will make anyone misty-eyed while performance binging.

The platform is currently offering a free seven-day trial, followed by a $8.99 monthly plan. (Because we can never have enough paid subscription channels now, right?)

But seriously, think about whether you like what you see by hopping on the free week’s trial. This could be part of your children’s cultural education, if you even need a reasonable excuse to work your way across the greatest Broadway shows ever seen from the comfort of a couch.