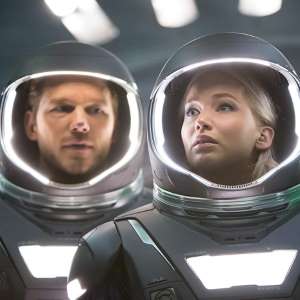 I assume you have already seen Passengers. Spoilers ahead.

Rewatching Passengers tonight I noticed a flaw in the plot. It was pointed out that the hibernation pods could keep them asleep, and wake them up when they arrived at Homestead II, but they didn’t have the equipment to put someone into hibernation. However, Aurora also mentioned she booked a round trip ticket. She was flying out to Homestead, staying a year, and then returning, presumably on the same ship she was on now — but that wasn’t made clear. One way or another they would need to have the equipment to put people back into hibernation, because the crew would be returning to Earth at some point.


Is it possible that Homestead is an established colony already and they have the equipment there to put people into hibernation? Perhaps. But that’s a tiny little thing that should have been mentioned in the story to close that loophole.

Aside from that very minor plot loophole, this movie in near perfection. The exploration of loneliness that Jim experiences flows right into his dilemma of waking Aurora, and then their developing relationship. Every step of the movie is well paced. The story keeps moving along without bogging down.

Credit has to be given to screenwriter Jon Spaihts for his outstanding work. Spaihts also wrote Prometheus, Dr. Strange, and the upcoming DUNE remake, which gives me more and more confidence that this time they’re finally going to get DUNE right. (DUNE is my all-time favorite science fiction novel.)

The performances Jennifer Lawrence and Chris Pratt give are outstanding. Everyone knows Jennifer is one of the most talented actresses around these days, but Chris is the one who has the more demanding role. There’s a 30 minute span of the movie where he is the only character in any scene — with the exception of Arthur, the android barkeeper. Chris really has to sell his character through expressions alone, something only a very talented actor can accomplish.

Aside: Remember that Sleeping Beauty’s first name is also Aurora. (My wife pointed that out to me.)

My top 5 favorite science fiction movies of the 2010s

Honorable Mention: Interstellar – I wasn’t a fan of this movie after the first watching; in my original review I gave it a C+, but since then it’s grown on me. This movie makes the Top 5 of the 2010s just based on how accurately they portrayed black holes and General Relativity.

I love Star Trek and Star Wars. It’s a shame none of the movies in either franchise comes close to making my Top 5 list. In my book, none of them would make the Top 10. So much potential for those movies squandered. They all had magnificent effects and action, but the scripts stank like an eviscerated Tauntaun.