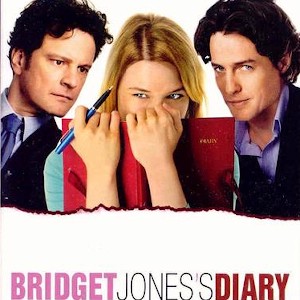 Back in the mid to late nineties there was a publishing phenomenon… Helen Fielding had written a faux diary about a thirty-something singleton called Bridget Jones. Bridget Jones’s Diary went on to become what The Guardian named as one of the ten novels that best defined the 20th century. Inevitably, it was snapped up to become the basis for a, so far, three film franchise. I say “so far” as there are four books in the series (Bridget Jones’s Baby: The Diaries was written in 2016) so there could be another, recognizability of lead player due to cosmetic enhancements notwithstanding.

Keeping up with the old “there are only seven basic plots in literature” thing, the central premise of Bridget Jones’s Diary is a reinterpretation of Jane Austin’s Pride And Prejudice, which was all the rage back in the early nineteenth century. Maybe including another Mr Darcy was a bit on the nose, but I guess it’s better than denying any connection at all. The “It is a truth universally acknowledged…”  bit is a part of the film, rather than the original source novel.


To Bridget, Just As She Is

And so it’s off to the film adaptation. The key word here is ‘adaptation,’ as the original novel has been not just de-Anglicised but, in a most telling way, positively Americanised! One of the big concerns of Bridget is her weight and the effect it has on the size of her thighs. This, I’m guessing, was written as a reflection on the craving of the mainstream media to present desirable women as being only the ones who are stick thin, as opposed to ones which are a more normal size.

What struck me, almost like a hammer on the bridge of the nose, was in the monologue regarding plans for the year and her resolutions. She starts off with, “Resolution number one, obviously, will lose twenty pounds,” and that’s the bit that shows which side of the Atlantic they’re aiming at.

An English person would have said, “Resolution number one, obviously, will lose a stone and a half.” The book makes the resolution to, “Reduce circumference of thighs by 3 inches (i.e. 1½ inches each),” rather than mentioning weight at all, but the summary at the end does include: “Weight gained 5st 2lb, Weight lost 5st 3lb (excellent).” I mean, the scales she weighs herself on give her weight as, about, 9st 10lb — twenty pounds would bring her down to 8st 4lb, which is odd to say the least!

Which brings us to casting. Let me say right from the start that Renée Zellweger is brilliant as Bridget. She nails the accent and looks the part. But, really, were there no British actors available?

Others considered for the role included… Helena Bonham Carter (British and genuinely Home Counties, but probably committed to Planet Of The Apes at the time), Amanda Donahoe (similarly authentic, but equally busy), Miranda Richardson (a bit too Northern, perhaps); Kirstin Scott Thomas turned it down, and Kate Winslet was too young. Tilda Swinton was an early choice but went on to do Vanilla Sky instead.

So, all in all, maybe choosing a Texan wasn’t the end of the world after all. Especially one prepared to put in the work, and the doughnuts, required to pull it off successfully.

The rest of the cast are spot on too. Colin Firth and Hugh Grant as the rivals for Bridget’s hand, and enormous thighs, are perfectly matched, as are her friends Jude (Shirley Henderson), Shazza (Sally Phillips), and Tom (James Callis).

Incidentally, Shirley Henderson is one of those chameleonic actors in the Timothy Spall mould, who keeps popping up in all manner of things. Her highest profile role is probably that of Moaning Myrtle in the Harry Potter series, but she also has a Star Wars credit on her CV! The cherries on the top are her parents, played by Gemma Jones and the always wonderful Jim Broadbent.

Throw in a fairy tale London that only actually exists in films (if it was as nice in reality as it is in Richard Curtis films I’d still be living there!) and you have the makings of an all round jolly way to spend, give or take, an hour and three quarters.