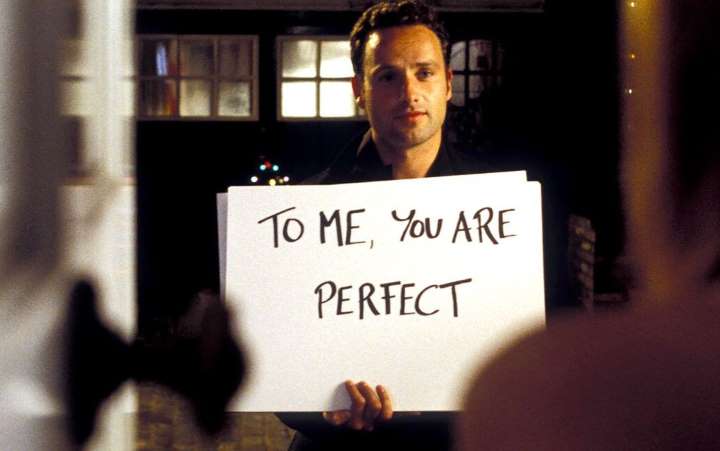 Back in October we were talking about articles for the run up to Christmas (yes, this stuff is all actually planned!) and the idea of a rewatch review of Love Actually was mentioned, especially a British take on the film. This took me a little by surprise, as I can’t help thinking that anything written by Richard Curtis could be anything other than quintessentially British.

For those who have been living under a rock for the last fifteen years, Love Actually is a collection of stories on the theme of love and relationships. The tweak to the story is that nearly all of the characters are linked in some way; related, professional ties, romantically, or friends. The exceptions are the singer Billy Mack (Bill Nighy), his manager Joe (Gregor Fisher), and the shop assistant/airport distraction Rufus (Rowan Atkinson). All the relationships would take too long to list. If you’re interested just Google “Love Actually relationships” and you’ll be swamped with articles, scholarly and less so, which explain all the various interactions.

Who do you have to screw around here to get a cup of tea and a chocolate biscuit?

While the British obsession with tea and biscuits is apocryphal but widely known, just how believable is it? I guess it’s time to trot out the old curate’s egg analogy and say that it is in parts. There are things like the chain swearing Billy Mack which rang true to me; I do have a go-to stream of invective for times of high stress.


Another relatable part to me is the Colin Frissell (Kris Marshall) character. At one point in the late ‘70s I was very close to flying to the USA to see how far I could make it just on my wits and my accent. Yes, I was that lonely, ugly arsehole with a British accent.

And then there is when Jamie (Colin Firth) tries to speak to Aurélia even after an intense course… we are renowned for our inability to learn other languages. Whenever anyone says that we’d all be speaking German if they hadn’t helped out during the war, I just point out that it’s only been seventy five years and we wouldn’t have finished sorting out the road signs yet.

A nice touch, I thought, is the bit where Jamie settles down in his French bolt hole and reflects on his failed relationship saying, “Alone again… naturally,”  which reminded me of a song from my teens, as did his recollection that “Silence is golden.”

Oh, Ant and Dec are interchangeable.

There was more than one lobster at the birth of Jesus?

One thing is the impression you get of London. It’s treated in a similar way to Paris was in Le Fabuleux Destin d’Amélie Poulain… perhaps just a wee bit too nice. No litter, no buskers, no homeless people or beggars. The people tend to have good jobs and live in nice homes. My first flat in London was in a Victorian house about the same size and vintage as the house I have now, but is over two hundred miles away.  My whole flat was the same size as my current bedroom now. There was a plaster board wall down one side, which gave me a tiny kitchen, and the toilet and bathroom was shared. Everybody here has decent sized, maybe not huge, but bigger than average flats and houses.

It’s also a bit far fetched to expect everyone to be so interconnected. Apart from the three mentioned earlier, all the main cast are supposed to be known to each other at varying levels of intimacy; they run from Colin the sandwich seller to David (Hugh Grant), who is First Lord of the Treasury, Minister for the Civil Service and Prime Minister.

And then there’s the Harry/Karen/Mia thing.

Harry (Alan Rickman) is happily married to Karen (Emma Thompson in a fat suit) but his new PA, Mia (Heike Makatsch) is not hiding that she wants him; she stops just short of whipping off her knickers and lassoing him as he walks away. Being a stupid, libidinous sack of glands (or a man as they’re more commonly known) he starts to fall for the attention and buys her an expensive piece of jewelry. Karen finds it and assumes it is for her, and so is heartbroken when she opens her gift and finds a Joni Mitchell CD, setting Alan Rickman up in the cruellest, most heartbreaking role he’s played since Hans Gruber.

The problems I have with the Harry part of the thread:

1, That necklace is hideous. £270 in 2003 is pushing £500 now, but it looks like something you’d pick up in Poundland; anyone who’d drop a monkey on that deserves all they get.

2, The box it comes in just happens to be the same size and weight as a CD box set. Unfortunately, the CD in question (Both Sides Now by Joni Mitchell) was only a single CD.

3, The necklace just sits in the box. It would move around and make a noise when she picks it up and while she’s hurriedly unwrapping it.

4, Harry really can’t tell there’s something wrong when Karen opens the present? The look on her face and the way she leaves so suddenly should start alarm bells in anybody with something attached to the top of their brainstem.

Let’s get the shit kicked out of us by love!

And then there’s the things that are just wrong…

When POTUS (Billy Bob Thornton) arrives at 10 Downing Street, it’s not his usual car which has anti-ballistic doors about 15cm thick.

The door to 10 Downing Street can’t be opened from the outside, so there is nowhere on it to put a key in.

The Prime Minister would not be allowed to run around an unchecked public place with such a small security detail.

But, ultimately, I’m looking for nits to pick.

If you look for it, I’ve got a sneaky feeling you’ll find that love actually is all around.

To my mind, Love Actually is a really good film; I rewatched it twice prior to writing this and have been hopping back and forth through it while I type, checking details and confirming thoughts.

And there are a lot of details to pick up on:

All in all, this is one of my favourite Christmas films and gets watched every year.

chevron_left Die Hard and Beyond: Are They Really Christmas Films?
6 Must-See Short Films In Horror chevron_right