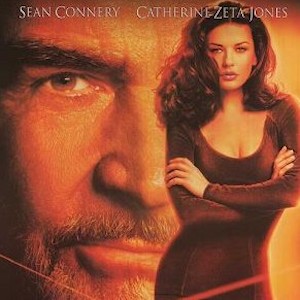 Because Entrapment is one of those “are they or aren’t they on the good side or not” films, interspersed with a fair bit of “hang on… which side are the good ones again?” Apart from Mac and Gin, which keeps reminding me of a cocktail of some sort, there is the ever striking presence of Ving Rhames as Aaron Thibadeaux — his supplier, and the only person Mac trusts. The story is that Gin is trying to pass herself off as a thief in the same league as Mac, so that she can lure him into a compromising situation and, well, entrap him.

I Stole The Rembrandt

Entrapment rattles along at a fair clip, squeezing in not one but two heists — three if you count the stealing of the Rembrandt that takes place within the first five minutes — and counting down from “16 days to the millennium” which leads us to the main event. The first heist is used as a trust gathering and skill proving exercise between Gin and Mac.


Without giving much more away than can be gathered from the trailer, the first job is to steal an antique Chinese golden mask from a well-guarded “Bedford Palace” played by Blenheim Palace, Woodstock… no, silly! The original one in Oxfordshire.

This heist is the one that you may have seen clips of, which show Ms. Zeta-Jones doing all manner of acrobatics and gymnastics to avoid the laser beams guarding the treasured mask, after practising using an array of cotton threads with bells on. Incidentally, those scenes when she is climbing the walls and cavorting on the rafter in the “I stole the Rembrandt” bit look like they were actually done by our Catherine for a simple reason… she actually did them herself!

Well, This Looks Like The End Of A Terrible Friendship

The main heist is for the sum of eight billion dollars, and is to take place at an international clearing bank in Kuala Lumpur, and it’s to be stolen using the fact that, due to Y2K phobia (remember that?) there will be all manner of security checks — which means the systems go off line — to allow them to steal a few dollars and cents from loads of accounts, similar to the way Gus Gorman (Richard Pryor) got rich in Superman III. Anyway… there’s loads of backwarding and forwarding, toing and froing, until you’re not sure who’s caught and who’s got away.

So this has to be a New Year film… hasn’t it? Well, originally, the story was timed to happen during the transition of the rule of Hong Kong from Britain to China at midnight, at the start of 1st of July 1997 but, I guess, they figured the new millennium, just two and a half years later, would have a more global interest and, hence, increased marketability.

Perhaps one thing that Entrapment did was convince Sean Connery that he was too old to be playing the romantic lead, especially with much younger women; this, while not his last film, was the last one to have him that particular role.  After all, at the time, he was thirty nine years older than CZJ… that’s even older than her real life husband!