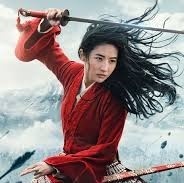 The obvious first step with a look at a film like Mulan is to do a compare and contrast piece with the 1998 animated version. And, obviously, there will be a bit of that but, bottom line, it would be a bit like comparing and contrasting apples and tractor parts… Other than the name and the outline, these are two different films.

Whereas the 1998 Mulan was a comedy/musical in the Disney grand tradition, the 2020 version is neither. OK, in 1998 if you got Eddie Murphy on board you weren’t aiming for high drama, but that wasn’t the reason, that was just how Disney rolled back then. Eddie was the effect rather than the cause.

In 2020 we have more of an action adventure vibe. There is music but only as background and accenting; none of the stop everything lets’s have a song breaks. Similarly, there is some humour but only in the “oh yes, something like that happened with my daughter”… smile raising rather than belly laughs.


But the action is flawless. Individual moments, small groups, whole armies battling it out; the whole spectrum of action scenes are here. Apart from one glaring omission… blood! There is not one drop of it shown anywhere, Whether this is to maintain Disney’s family-friendly reputation, to make sure it hits the right certificate rating, or just to show that you can make a huge, combat centred film without spending a fortune on barrels of fake blood, I don’t know. It could be a combination of all three. And, despite being an admirer of Mr Tarantino’s work, I have to say that Mulan wasn’t diminished in any way.

Dragons, a phoenix, and Chinese history

The biggest casualty of the change of style: Mushu the dragon that helps 1998’s Mulan along the way. In the animation the family’s “spirit animal” (if that is the term in Chinese culture; please forgive my ignorance) is a dragon which is where we get Mushu. However, 2020’s family protector is a phoenix, which we see flying around on the occasions when Mulan needs a boost of confidence, reassurance, or conviction in her path and decisions.

I have seen reports that this version of Mulan is closer to the original 5th century story. I’m in no position to say whether this is true or not, but elsewhere on this site there is an analysis of the original story by our very own native Chinese RunPee contributor; take a look and decide for yourselves.

I remember taking my daughter to see Mulan back in 1998 when she was nine years old. Will I be watching the new version with my seven year old granddaughter? Yes… eventually. It’s a good story, well told, but I just think it is aimed at a higher age group than the original. The fact that gender shouldn’t be a bar to greatness is something which needs saying, but I think the live action Mulan may be a bit too mature for a primary schooler.

Is Mulan A True Story? Answered by a native Chinese