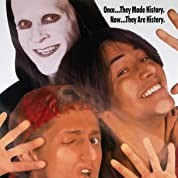 While Excellent Adventure was indeed splendiferously excellent, Bogus Journey, as it says on the box, is a bit bogus. It’s worth seeing — and seeing again right now — to prep for the new Bill & Ted trilogy capper Bill & Ted: Face the Music.

What was Most Excellent

As with Bill & Ted’s Excellent Adventure, the time travel plays it fair, by their own goofy rules. As before, in a telephone booth. I don’t know if that’s a nod to the TARDIS in Dr. Who, but it makes some weird kind of subconscious collective pop culture sense. I like the Circuits of Time Directory and the infinity symbol phone button.

The booth also travels in space, so this is really a Space & Time Machine, but most movies never get this right, so it’s easily forgiven. Maybe part of the numbers they dial have a…lol…’area’ code.


On my next trilogy rewatch I’d like to just make notes about the time machine and see how many paradoxes it creates and if it cheats.

Death, as implied from the end credits in Excellent Adventure, was a scene stealing son of a succubus in Bogus Journey. Death is clearly the hero of his own story. Many splendid kudos to William Sadler for a really interesting performance. I’m glad he’s back in Face the Music. Like with the Minions, the Grim Reaper could have his own spin-off.

Also, the callback to Captain Kirk and the Vasquez Rocks was a neat little Easter Egg for sci-fi fans.

Bill & Ted themselves continued their winsome slacker ways, and make me want to both insert my already prodigious vocabulary into normal discourse,  and also be more excellent to people. These ‘losers’ have something we could all take to heart: it’s better to be happy with ourselves and show love to our friends than to fit society’s expectations.

Although saving the world is nice too.

What was Sorely Bogus

The villain was overplayed and boring. I don’t have much to say about him. Thankfully, he’s not in it much.

‘Station’ the super smart being(s) was…strange. I didn’t find any of that station-speak amusing and I’m wondering what I missed. Was this funny if you got the joke? Is this a thing? Did you walk around saying ‘Station‘ when this came out? (It’s no ‘I am Groot’…sorry.) Just checking: Station — as a term — did make it into the Urban Dictionary, but only in reference to the 1991 Bill & Ted movie.

The scenes in Hell were silly, and not in the slap-dash-happy way. From the time Bill & Ted saw Satan, to being stuck in their personal versions of Hell, I was yawning. Not as amusing as they hoped; it went on too long.

In the spirit of RunPee, a great Peetime starts from seeing Satan on those floating rocks and goes a couple of minutes with the boys crawling around through tunnels. A Peetime freebie!

Sadly, Hell is lukewarm. Also, far from being an interesting set piece, their Heaven is as dishwater dull as Hell. (Yeah, Heaven was…people playing chess and wearing white? Wandering around a Grecian ruin, murmuring for eternity?)

Death is the man

I missed the Excellent crew of Billy the Kid, Beethoven, “So-crates”, et all from the first adventure, crammed into one telephone booth slash time machine. Team Bogus was okay. Maybe this was subtly intentional to be…bogus? I don’t think this film is that self-aware. Thankfully, in Face the Music, much of the ensemble magic is back.

However, yay, the ‘games’ section in Bogus, where Bill & Ted play Death for massive stakes, is worth the price of admission alone. Twister, Battleship — all good vintage fun. And now I wonder how Death would handle Operation. That might be right up his alley.

Basically, just pay attention to Death in the background while everything else happens in the foreground in Bogus Journey. Listen in too: Death has the most bodacious throwaway lines.

I want to grade Bogus Journey with nostalgia-tinted glasses, but have to draw the line. There are too many scenes that, as Ted would say, suck. It’s a middling middle movie. Death singlehandledly keeps this movie in the B range. So let’s mark it in the low Bs and move onto the finale: Face the Music.

Is there anything extra during the end credits of Bill & Ted Face the Music?