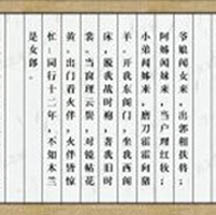 Everyone knows that Mulan is an old Chinese tale. But is it just a story? Or is Mulan real? Having grown up in China, I learned the ballad of Mulan in 7th grade. Just like you, I had wondered if this brave and extraordinary young woman ever existed in real history.

The question still evokes a lot of discussions, but just like the Homeric epics Iliad and Odyssey, Mulan is thought to be loosely based on some facts.


The “Ballad of Mulan” is a folk song from Northern Dynasties China; it recounts the story of Mulan, a girl who goes to war in place of her father. The pseudo-historical personage of Mulan probably lived in the fifth century, when the Toba, who dominated northern China, was engaged in a long war with the Rouran on their northern frontier. It is thought the ballad was collected into an anthology of yuefu in the mid-sixth century and later popularized during the Tang dynasty.

The ballad of Mulan is pretty short in ancient Chinese, here is a picture of it written in Chinese:

I had to recite the ballad of Mulan when I was around 14, and I will never forget the first line of this ballad. Why? Cause it sounds like this: “Gee gee foo gee gee, Mulan done who zhi”. Just to be clear, Mandarin does not normally sound like this. Because technically, it’s not Mandarin, it’s ancient Chinese. I’m no linguist, but just to put things in perspective, the level of difference between Mandarin and ancient Chinese is similar to the difference between Latin and English.

(Here is a video about ancient Chinese pronunciations from one of my favorite YouTube channel NativeLang.)

How Close Is The Disney Version of Mulan?

I rewatched the 1998 animated Mulan and found some very interesting tweaks of the story.

I found a translation of the ballad of Mulan that is pretty literal if you are interested.

She does most of the movie Peetimes with Dan and very rarely writes blogs. If you are seeing this bio, that means you have sought her out.
chevron_left Movie Review – Truly, Madly, Deeply
Top 12 James Bond Songs chevron_right