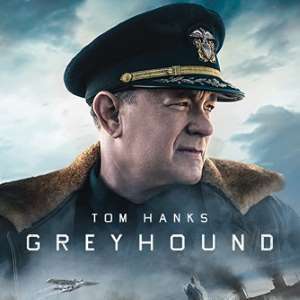 This is twice in one week that Tom Hanks has been in the navy here. A couple of days ago I watched Captain Phillips, and today it’s Greyhound, so Mr. Hanks crossed from the Merchant Navy to the Royal Navy, or whatever the American equivalent is.

Greyhound is an adaptation of a CS Forester novel about the travails of an Atlantic convoy during WWII. It’s only a relatively short film — 1:20ish after you take out all the credits — and pretty much non-stop action after the first five minutes. If there isn’t an attack taking place, then there’s about to be one, or it’s the aftermath of one. Tension is built up quickly, released, and then built up again. This is repeated until the end comes. If I’m honest, it’s a bit too suddenly for my liking. It’s definitely not like the five hour version of Das Boot. No sweaty, nervous Germans jumping at every creak or bang while the tension ramps ever upwards.

So how is it played?

In the main, very well. Tom Hanks is his usual value for money. Moreso considering he wrote the screenplay, as well as starring as Captain Ernest Krause. Elisabeth Shue has little more than a cameo in the first five minutes. Stephen Graham is Charlie Cole, the second in command. Now, I like Stephen Graham — he’s played some brilliant, powerful roles and he does sterling service here apart from some of his lines. And the problem is that he is no Michael Sheen, James McAvoy, or David Tennant when it comes to accents. It could be just that I come from his neck of the woods but I could definitely hear his Kirby accent on a few occasions.

About The Peetimes: This is quite a short film. Disregard the studio idents and credits, and the running time is a shade over one hour and twenty minutes. As a result I’ve gone for just the one Peetime about half way through. Bear in mind that this is quite an action packed film and you won’t want to be late back!

There are extra scenes during, or after, the end credits of Greyhound. (What we mean by Anything Extra.)

chevron_left How movies get C Grades at RunPee
Is there anything extra during the end credits of Greyhound? chevron_right