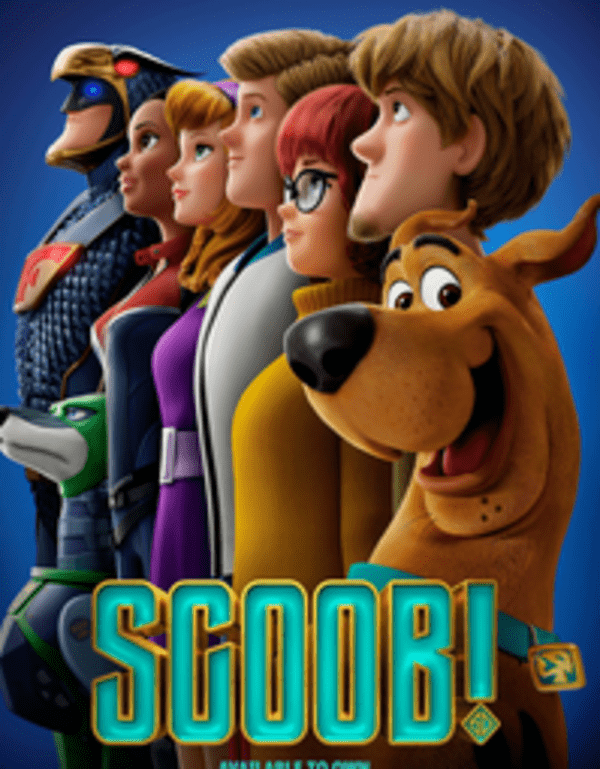 I grew up on the cartoons of Hanna-Barbera.  Before they moved them all to Boomerang, the USA Network used to air them on a show called Cartoon Express.  Every summer, I went to Kings Island theme park where they had live mascots from the cartoons just like Disney World.  The parking lot was even sectioned off by character:  Dino, Quick Draw McGraw, Snagglepuss, etc.  All of this is to say that my favorite parts of the new movie Scoob!  aren’t the scenes featuring the Scooby gang but all the cameos and the hints in the background about what’s coming.   Hanna-Barbera is on the verge of launching their own cinematic universe just like Marvel.


The Characters in Scoob!

Let’s start by looking at who appears in Scoob!

Scooby-Doo, Shaggy, Fred, Daphne, and Velma are pretty recognizable to anyone who’s watched a cartoon in the last several decades.  These mystery-solving, ghost-hunting teenagers are a childhood favorite.  They appear here for the first time in 3-D animation.

Blue Falcon originally appeared in the 1976 TV series The Scooby-Doo/Dynomutt Hour.  A Batman-esque superhero, his secret identity was millionaire Radley Crown.  His sidekick was the often malfunctioning robot dog Dynomutt.  In Scoob!, the roles are reversed and it is Blue Falcon who is the incompetent companion to a long-suffering Dynomutt.

Dee Dee Sykes originally appeared in the TV series Captain Caveman and the Teen Angels.  The show was created to cash in on the popularity of Charlie’s Angels.  In Scoob!, Sykes has joined Blue Falcon as part of Falcon Force.

These villains first appeared in the 1968 series Wacky Races which was inspired by The Great Race (a fun film if you’ve never seen it, much like a live-action cartoon),  They also starred in the 1977 show Scooby’s All-Star Laff-a-Lympics which featured different teams of Hanna-Barbera  characters competing in Olympic-style events.

For the true Hanna-Barbera fan, Scoob! is littered with lots of Easter eggs and hints about other famous characters.  Especially during the end credits.  Here’s a rundown of all the references to other Hannah-Barbera characters in the film.

Next to Takamoto Bowl is Peebles Pet Shop.  This was the setting for The Magilla Gorilla Show.  Magilla himself is currently absent from the shop window, suggesting he’s been adopted by a new owner.  But he’ll probably be returned soon for a full refund.

Dastardly and Muttley in Their Flying Machines

Dick Dastardley has a picture of Muttley in his workshop with a chest full of medals.  On the TV show, Dastardley and Muttley in Their Flying Machines, Muttley often had to save Dastardley’s hide but would only do it in exchange for a medal.

The Mystery Macine drives past a billboard with a picture of Squiddly Diddly that says, “Come see me at Bubbleland.”  The octopus originally appeared on The Atom Ant/Secret Squirrel Show in 1965,  He was an aspiring musician who often tried to escape the amusement park in search of his big break.

Hong Kong Phooey appears on the side of a video game cabinet called Phooey Phighter during the amusement park scene.  Bruce Lee’s Enter the Dragon came out in 1973.  In 1974, Hanna-Barbera created the character Hong Kong Phooey in response to the popularity of kung-fu films.  Hong Kong Phooey was a dog who was a vigilante with karate moves.  His secret identity was as a mild mannered janitor.

A concert poster for The Banana Splits can be seen on the wall of the amusement park arcade.  The Banana Splits’ Adventure Hour was a 1968 live-action collaboration with Sid and Marty Kroft featuring a fictional rock band made up of animals.

A Hex Girls concert poster can be seen to the right of the arcade door.  There’s also a Hex Girls pinball machine.  The Hex Girls ae a fictional rock band that appeared in the movie Scooby-Doo and the Witch’s Ghost.

One of the arcade games Shaggy and Scooby use to barricade the arcade door is Laff-a-Lympians.  As discussed earlier, this show was inspired by the Olympic games.

Space Stars is another arcade game at the amusement park.  Space Stars was the name of a sci-fi series.  It starred classic characters Space Ghost and The Herculoids in new adventures and introduced new cartoons Space Ace and the Space-Mutts and Teen Force.

Penelope’s heart logo can be seen on the side of an arcade cabinet for a racing game.  She first appeared as the only female competitor in Wacky Races and later starred in her own spinoff, The Perils of Penelope Pitstop.

Frankenstein, Jr. and The Impossibles

A billboard that the Mystery Machine passes advertises Jellystone National Park.  This is the home of Yogi Bear (and Boo Boo!).  Yogi debuted in 1958 as a supporting character on The Huckleberry Hound Show.  He is notorious for stealing picnic baskets.

Some of the biggest reveals are saved for the end credits.  Let’s take a look at who shows up.

First of all, Blue Falcon seems to have gained some exciting new additions to his team.  Atom Ant, Jabberjaw, The Great Grape Ape, and Captain Caveman appear in a news story as “Falcon Force’s new recruits.”  Atom Ant had his own show in 1965.  He was a tiny superhero.  Jabberjaw starred in his own cartoon in 1976.  He is a shark who is the drummer for a band called The Neptunes and he sounds like Curly from The Three Stooges.  The Great Grape Ape was the star of 1975’s The Great Grape Ape Show.  Grape Ape is a 40-foot purple gorilla.

The news story is revealed to be playing on a TV in Dr. Benton Quest’s laboratory.  Johnny Quest was a 1964 show about the adventures of government scientist Dr. Quest and his young son.

Dr. Quest shows Fred, Velma, and Daphne blueprints for Rosie the Robot from The Jetsons.  This is an interesting bit of retconning that suggests Dr. Quest designed Rosie.  The Jetsons was a 1962 cartoon about a futuristic family.

Sketches of the Wacky Races race cars decorate the wall of Dick Dastardly’s cell when Muttley shows up to break him out of prison.  Dastardly hasn’t been idle during his time in the clink.

Plans for a Hanna-Barbera cinematic universe were originally announced in 2016 with a Scooby-Doo movie leading the charge.  However, the movie missed its launch date in 2018.  There is no confirmation whether Scoob! is the same movie or not.  However, screenwriter Matt Lieberman did confirm to SyFy Wire that the original concept for Scoob! included Grape Ape, Atom Ant, Jabberjaw, and Captain Caveman as part of Blue Falcon’s team.  S.C.O.O.B.  originally stood for Special Covert Organization of Otherworldly Beasts.  In a separate interview, director Tony Cervone added that Dr. Benton C. Quest from Johnny Quest was part of the original script as well.  Cervone added that he sees these characters as being “on the bench.”  “They’re ready to come in at any time if we need them to.  I consider those end credits as a continuation of the story.  They’re there.  They’re in the universe and they’re there to be explored.  I don’t know what’s next, but I do feel like we’ve established a really rich universe that can go in a lot of different directions.”

In a recent interview with Den of Geek, both Cervone and head of animation Bill Haller seemed excited about the future of a Hanna-Barbera cinematic universe.  “There’s so many ways you could go,” Haller says.  “I kind of want to spend more time with those kids and tell those early stories [the young version of the Scooby gang at the start of the film].  I love Captain Caveman.  I think that guy could have his own movie.  I think Brian, Dynomutt, and Dee Dee could have their own series.  I want to see more of the Falcon Force.  I want to watch that team grow because there’s definitely, even in the credits at the end, you could see that the team is growing.  This franchise has been around for 50 years and hope is that it will still be going 50 years from now, and in 100 years someone will be making a new Scooby-Doo movie.”

Cervone says, “We all carry that baton for a while and then we pass it on to someone else.  I feel like now there’s this new playground for people to play in.  Get in there and go for it, you know?  The classic world still exists and now we’ve got this other world, go mess with it!”

Warner Animation Group has not announced a sequel for Scoob! yet, nor a spinoff for any of the other characters in it.

There is a Tom and Jerry film slated for release in 2021.  It will be a mix of animation and live-action.  Tom the cat and Jerry the mouse will be animated.  Everything else, including the other actors/characters will be live-action.  The cast includes Chloë Grace Moretz, Michael Peña, Rob Delaney, Colin Jost, and Ken Jeong.  Tom and Jerry will be silent roles.  There is no word yet on whether the film will include any Hanna-Barbera cameos in the Scoob! fashion.

According to an article in Variety from 2018, Warner Animation Group is also working on Jetsons movie with writer Matt Lieberman and Sausage Party director Conrad Vernon.  WAG is also developing features for The Flintstones and Wacky Races.  (Which means we’ll be seeing more of Dick Dastardly and Muttley.)  However, there have been no updates on these projects in the past two years.

As Tom Petty said, “The waiting is the hardest part.”  Unfortunately, waiting is the life of a Hannah-Barbera fan for who knows how much longer.  After dangling the tasty piece of eye candy that is Scoob! in front of us, Warner Animation Group is playing its cards close to its vest as far as the future of the HBCU.  One can only hope an announcement concerning a Scoob! sequel or spin-off will come any day now.

Breaking down the extra scenes in Scoob!

Is there anything extra during the end credits of Scoob!?