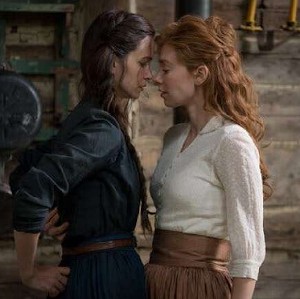 I was really excited to see this movie. From the trailers it seemed like it was going to be a steamy look inside of two lonely women stuck on dreary farms. Perhaps a forbidden affair that was obviously going to explode in their faces. All these thoughts were running through my head as the movie started.

This is where the problems begin for me. It started slow, but for good reason. They did an absolutely amazing job of setting the scene and the tone. They immersed you into the world they lived. It was cold, lonely and isolated. So yes, this part of the production was spot on. With the slow build I thought for sure that we were going to see the good stuff. The chemistry was boiling over between Abigail and Tallie. Katherine Waterston and Vanessa Kirby were perfection. The acting from both of them blew me away.


Once the movie finally gets to the affair, it was too quick and almost glossed over. I wanted more. Show me what two women that are so very drawn to each other can get into. I felt like the movie was actually teasing the audience. You knew what they wanted to do, but they didn’t show us enough to justify this R rating.

That being said, I want to start a new edition to the review: Just How R Rated is this Movie? There were two scenes of them kissing, and in one scene you see them in bed together, but there are sheets over them. One time of seeing a man pull his pants down, who gave us a full moon. The one piece de resistance is a few seconds of the two friends in bed… and you see their breasts.

I don’t know if this qualifies but they did kill animals: only to eat them though.

It had all the key ingredients to be an outstanding movie; they just didn’t dig deep enough for me. It was fairly short. Had they tacked on another 15 minutes they could have had an Oscar winner.

About The Peetimes: I’m going to recommend the 1st Peetime; it’s before any of the intense stuff starts. The 2nd Peetime is for an emergency.

There are no extra scenes during, or after, the end credits of The World To Come. (What we mean by Anything Extra.)

chevron_left First View Movie Review – Gosford Park
Is there anything extra during the end credits of The World To Come? chevron_right