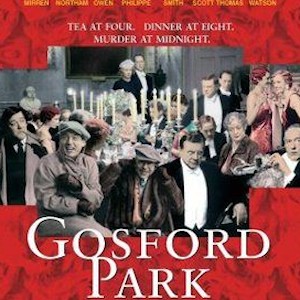 Actually, there’s a bit more to it than that. Gosford Park came about from Bob Balaban talking to Robert Altman about doing an Agatha Christie style murder mystery film. Balaban had been working with Julian Fellowes, suggested him to Altman, and the rest, as they say, is history. Oh… if you’re wondering if Julian Fellowes has the appropriate level of knowledge to write about the Upstairs/Downstairs divide, his full title is Julian Alexander Kitchener-Fellowes, Baron Fellowes of West Stafford DL — so I think he knows what’s what.


I’m Desperate For A Fag

Gosford Park is a satirical black comedy mystery film, influenced by Jean Renoir’s classic, La Règle du jeu (The Rules Of The Game). Similarities to Downton Abbey are not surprising and not just because of the pedigree. The original planning for Downton Abbey was for it to be a spin off from Gosford Park but, during development, it turned into something similar but different — which allowed the action to be time-switched back twenty years. The other obviously huge difference is that Gosford Park is a story spanning a weekend, whereas Downton Abbey spans fifteen years.

Gosford Park revolves around a weekend shooting party held at the eponymous estate, attended by a group of the rich, famous, and worthy, and their servants. The attendees are made up of a marvellous ensemble cast, including Michael Gambon, Bob Balaban, Maggie Smith, Kristin Scott Thomas, Stephen Fry, and Helen Mirren. As well as the local aristocrats, there is an American film producer, an actor, and Ivor Novello. Ivor Novello is feted more by the below stairs people than by the ones he is mingling with. I can imagine this quite easily; in my mind I am still young and trendy, but when my granddaughter starts talking about the latest things she’s interested in I realise that I haven’t got a clue what the current zeitgeist actually is.

It’s Worse Than That, He’s An Actor!

Everybody goes to their various areas and prepares for the weekend. During the course of the weekend there is a murder, and an attempted murder, which leads to the arrival of the police. Who is killed and by whom I will not mention here, so that anyone who hasn’t seen it can enjoy the story unfurling.

The casting, performance, script, setting, costume, everything is excellent. Fellowes captures the way the class system works beautifully. A particular example is Stephen Fry as Inspector Thompson. As a member of the middle class, he falls in-between the upstairs gentry and the downstairs staff. Consequently, he is quite brusque with the servants, but deferential to the point of obsequiousness with those who he perceives as his betters. If you take note, you’ll spot that the Inspector never manages to complete a sentence when speaking to the aristocracy.