Movie Review – The Good Dinosaur (and The Pixar Theory) 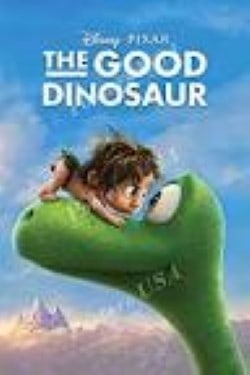 He’s really only an okay dinosaur.

Okay, yeah, this Pixar film was pretty, but not as pretty as Disney’s  The Lion King, which it also managed to…ahem…totally rip off. It’s also very reminiscent of Dreamwork’s initial Toothless scenes in How to Train Your Dragon.

It’s got some cute moments, and an interesting take on the feral boy. He’s a hoot, and seems smarter and more useful than Arlo, the useless titular young Apatosaur.

And from time to time, the story gives us some insight about how dinosaurs might have evolved culturally if that meteor skipped Earth entirely. But I didn’t really buy it. The world-building wasn’t there. This ended up being a buddy travel movie. There was some cleverness, but not up to the level I expect from a Pixar classic.

Why You Should See The Good Dinosaur Anyway

The only reason I saw The Good Dinosaur:  I watched a bunch of videos on The Pixar Theory, and the Cretaceous Era is kind of where the possibly interlinked overarcing story begins. So I found a copy of The Good Dinosaur (and it’s on Netflix right now, so catch it before Disney Plus steals it for their own private channel). I played it while cleaning my room (it’s not gripping enough to really sit and watch, no matter how amusing Sam Elliot is as a T-Rex herding longhorns).

By the way, The Good Dinosaur is an awful name for for movie. Did the producers really not care at all? What does that even mean?

The movie is mostly just sweet. Not bad. In fact, it’s slightly better than average. But I expect far better from Pixar.

For the first time, I’ll give a movie two grades, depending on how savvy and discerning you are in the animation genre.

Movie Grade for Kiddoes: B (Gentle film, gentle humor, and hey, it only might make you cry.)

Movie Review – How to Train Your Dragon (No Spoilers)