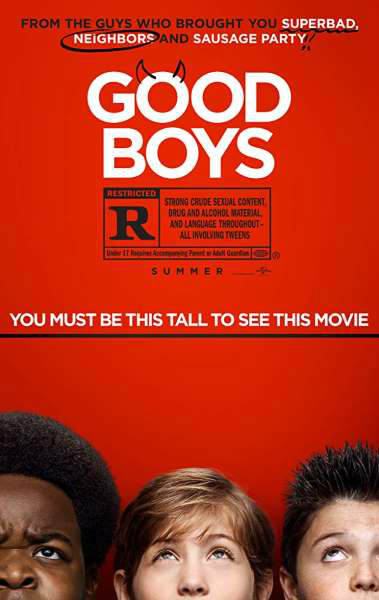 Good Boys was awkwardly funny. Like really funny. I was worried I was going to pee from laughing so hard, and I can’t RunPee during movies, since I have to get the Peetimes for the rest of you.

There were moments I found myself chastising my inability to hold in my laughter. They pushed the envelope as far as one can be pushed. What I found the funniest was the situations that the boys were getting into was totally over their heads. Them being so young and naive, coupled with the situation, was priceless.

People are screaming over how wrong this movie is. They were scandalized because of the characters being tweens. Sure, it’s not every day you watch little ones swearing like sailors or learning to kiss on a sex doll. But is it any worse than watching criminals kill cops, or a homeless girl turn to prostitution?


There will always be something scandalous on the big screen; that’s what fills the seats. Good Boys is rated R for a reason, folks. Don’t take little Suzy or Johnny; you’re not gonna want to answer their questions afterwards.

The Actors: the Best Part of Good Boys

The actual boys were terrific little actors. Each of them brought just a little bit more spark to the movie. If I were basing my grade on them, it’s an A all the way. My grade faltered a bit due to some gaps in the continuity. There were enough to distract me from completely enjoying the movie.

Good Boys would make a great date night movie, just as long as neither of you are an uptight type. Walk in expecting to see some raunchy jokes, lots of sex toys, and a plot based on drugs.

About The Peetimes: Good Boys is a really short movie, and they pack a lot of stuff into each scene, which makes finding Peetimes hard. I chose these 2 because they were easiest to sum up without losing a lot of punch. I’ll warn you though, there is humor in every scene, and I can’t duplicate that in a Peetime.

There are no extra scenes during, or after, the end credits of Good Boys. (What we mean by Anything Extra.)