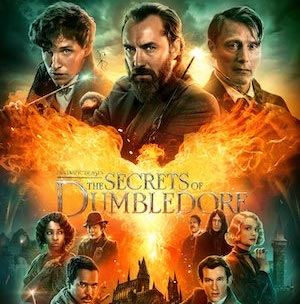 Every so often there’ll come a film that is looked forward to for various reasons. New James Bond adventures are up there, certainly. Something from the Marvel or DC worlds providing it hasn’t got Jared Leto attached. I even remember the days when a Carry On film was something to look forward to!

The Harry Potter franchise was well into the “can’t wait until next year” category. By extension, the Fantastic Beasts spin-off/prequel series was also eagerly awaited.   It came about after a very slim volume entitled Fantastic Beasts And Where To Find Them was released to raise funds for Comic Relief in 2001 along with Quidditch Through The Ages.


In 2016 the opening episode of a five-film arc was released and just named Fantastic Beasts And Where To Find Them. It featured the ‘author’ of the original book, Newt Scamander, a whole bevy of truly fantastic beasts, and the outlines of a story involving people from Albus Dumbledore’s past.

Our War With The Muggles Begins Today!

Two years later the next episode, Fantastic Beasts: The Crimes Of Grindelwald, arrived and featured far fewer beasts and far more from Dumbledore’s past. It actually found room for the man himself; fewer in years, slimmer of the waist, and trimmer of beard in the shape of Jude Law.

But then the problems started. Unlike every other film planned in the last five years,  Fantastic Beasts 3 was affected by much more than the pandemic. One of the main stars was dropped, another sidelined, yet another has been in some unpleasant trouble, and the originator has fallen out with members of the community that originally saw her world as a safe haven.

Some problems led to re-casting, some led to a change in part size, some led to a change in font size, and some problems are ongoing. One change, though, has been, in my opinion, for the better. Personally, I think that Mads Mikkelsen should have been cast as Gellert Grindelwald from day one. It’s obvious; you want ethereal, otherworldly, and vaguely mystical you go for Mads. Unless you need a woman and then it’s Tilda Swinton.

So how has Fantastic Beasts: The Secrets Of Dumbledore coped with all the upheaval? I’ve already given my opinion on the recasting of Grindelwald. There are even fewer of the titular fantastic beasts. Katherine Waterston is still barely seen despite her original importance.

However, the biggest fault, to my mind, is that there is simply not enough in the original slim volume to cover the whole five films of the franchise. As a result there is a certain feeling that the story is being written almost while it’s being filmed. The latest outing sees Grindelwald beginning to rise to power but is rather ham-fistedly shown as a parallel to the political situation that was developing in the (real) muggle world.

There’s Nothing You Can Do To Stop Me

Is it worth carrying on with the series? I’ve read plenty of articles that suggest that the Fantastic Beasts should be euthanized but that is mainly because of the off-screen shenanigans and disputes. If fourth and fifth episodes are to be made, I would suggest looking back at the original Harry Potter books and trying to bridge the gap between where they started and where they’ve got to so far.

I went to see Fantastic Beasts: The Secrets Of Dumbledore with my daughter. She’s a die-hard Johnny Depp fan so didn’t agree with me about the casting change but both agreed that there should be at least one more go to see how the story of Grindelwald is wrapped up and how it fits in with the rise of Voldemort.

About The Peetimes: I have four Peetimes spaced fairly evenly throughout the movie.

The story is rich with details so no Peetime is great, but will suffice if needed.

There are no extra scenes during, or after, the end credits of Fantastic Beasts: The Secrets of Dumbledore.

Plot
Professor Albus Dumbledore knows the powerful Dark wizard Gellert Grindelwald is moving to seize control of the wizarding world. Unable to stop him alone, he entrusts Magizoologist Newt Scamander to lead an intrepid team of wizards, witches and one brave Muggle baker on a dangerous mission, where they encounter old and new beasts and clash with Grindelwald’s growing legion of followers. But with the stakes so high, how long can Dumbledore remain on the sidelines? (Warner Bros media release)

Movie Rewatch Review – Harry Potter and the Goblet of Fire

Why Newt Scamander is a Fantastic, Yet Underrated Hero