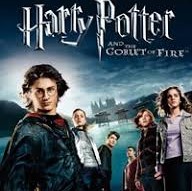 My favorite of all the Harry Potter films — and books for that matter — this is just an A+ good time. If you like a quest-type adventure story, Goblet of Fire is a fine addition to the ranks of high fantasy.

Unfortunately, I can’t speak for how well this tale holds together if you haven’t read the (very very long) novel, but most Muggles seem to agree this is the most fun film in the Wizarding series. It’s also an intermediate film, marking two transitions: from the characters’ childhood to teen years, and the moment when Voldemort actually returns. He’s no longer a boogeyman. Here’s where the shit got real in the universe outside of Hogwarts.

It’s a pity that breaking up long books into two-part films hadn’t been a thing at this point, since it’s one of the longer books and deserved having all the scenes and nuances displayed. Only the Deathly Hallows finale (a shorter book with a lot of filler movie scenes) got this treatment.


In another note, I really wish the World Quidditch Cup scene had been allowed to play out. This was like watching the coin toss of the Superbowl and then skipping to the afterparty.

This is sort of a quick place-holder review for now

I’m doing a series rewatch to add all the Harry Potter Peetimes to the RunPee app, so until I reach Goblet, this will do for now. Feel free to comment below until I can! Which is your favorite of the Harry Potter Wizarding World films?

About The Peetimes: Peetimes to be added when I get to this one in the rewatch queue. Offhand, I would suggest the House Elf subplot, except that’s only in the book and not the movie. 😉

There are no extra scenes during, or after, the end credits of Harry Potter and the Goblet of Fire. (What we mean by Anything Extra.)

Harry Potter and the Goblet of Fire – Live, in Concert

Voldemort Will Funk You Up