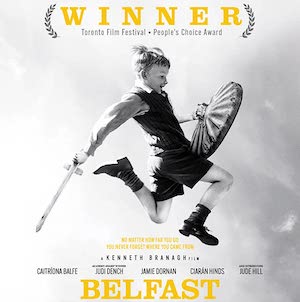 Sometimes things things just fall into place in a nicely convenient way. I was part way through writing one of my short biography pieces, this time about Judi Dench. I’d seen quite a few of her films and a number of interviews with her on TV, usually thanks to Graham Norton! However, I hadn’t seen one of her latest…Belfast.  Then, totally out of the blue, comes an offer from those nice people at Apple. Believe it or believe it not it was a reduced price for…The 355! Oh, and Belfast.

I’ll be honest. I was in two minds about watching Belfast. You may be wondering why. After all, it’s written by Kenneth Branagh, he won the Best Original Screenplay Oscar for it,  and it stars Judi Dench and Ciarán Hinds. The reason why is that I remember the period of The Troubles. Saying The Troubles like that makes it sound rather like a few harsh words in a tea room. However, back then, there was no more chilling question than “Are you Protestant or Catholic?”


I Didn’t Come Up The Loch In A Bubble

Belfast isn’t, I don’t think, a verbatim retelling of Kenneth Branagh’s childhood. Rather, it is a drama based on and featuring events that happened around him. However, there is, very probably, more than just a hint of actuality about the events depicted. I can say this because I can remember the news throughout the thirty plus years of The Troubles. During that time there were around fifty thousand casualties including over three and a half thousands fatalities.

The opening few minutes sets the scene perfectly. There are a couple of minutes of very high quality, full colour drone shots of modern day Belfast. We end up on one of the famous murals. Not one of the sectarian ones, but a celebration of working men. There is a pan up and, as we go over the wall, we’re told it is 15th August 1969 and the pictures turn to black and white. We’re looking at a typical street full of children playing in the sunshine during the long summer holidays.

I’ve Had Too Much God For One Day

The children are running around playing hop scotch and other street games. They are all happy and laughing. There are some adults around enjoying the sunshine, and chatting with neighbours. Then, with no warning, a riot starts. At the end of the very same street where the children had been playing a group of men appear with scarves around their faces and are throwing bricks. A car is set on fire and rolled down the street. Windows are smashed and petrol bombs hit front doors. The whole episode is accompanied by shouting and screaming to get the Catholics out of the street.

Belfast turned out to be far more enjoyable than I thought it was going to be. Yes, there were times when I was unsettled by seeing a reminder of those times but they were outweighed by the fun and exuberance shown by Jude Hill as Buddy, the character based on the young Kenneth Branagh. His relationships with his family, especially Granny (Judi Dench) and Pop (Ciarán Hinds), were a delight to watch. In short, the warmth and humour shown in the family interactions far outweigh the horrors of The Troubles.

chevron_left Is there anything extra during the end credits of Strange World?
Movie Review – Devotion chevron_right