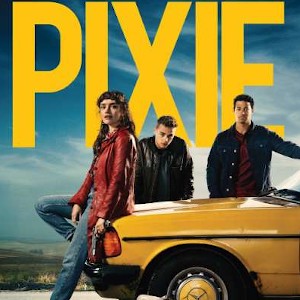 This was a spur of the moment decision. Whilst sitting in the cinema yesterday (Thursday) I saw a trailer for Pixie and, as I had nothing planned for the next day thought I’d book tickets on the way out. I can hear you all now saying, “You dull bugger, that’s why they show trailers!”

…But I was taken by the look, sound, and the whole feel of it and I regret nothing!

So what is Pixie? It’s a family revenge/comedy heist/crime thriller. It has an easy charm which is only helped by the Irish accents. I’ll admit that I’m a sucker for non-English British accents… Irish, Scots, Welsh: I like them all. And this is a totally Irish film; the only non-Irish characters are non-speaking Afghani Catholic Priests… yes, really!


The story starts with the eponymous Pixie promising vengeance at her dead Mother’s grave.

Then we cut to two ne’er-do-wells pulling up outside a church, putting on animal masks, pulling out guns, and walking into the vestry to hold up the priests, including the two Afghan chaps. There they have a bit of a shoot out and end up running off with a bag full of MDMA or Ecstasy, and leaving behind the money and a room full of dead priests. There next follows a falling out between the two robbers, which leaves one dead and the other out for blood… Pixie’s blood!

From then on, things start to get more convoluted, as these films are wont to do. Relatively innocent people get caught up in things and try wriggling their way out with the “help” of more experienced people, i.e. villains. Things get complicated and more people get involved, situations get stickier, and all hope evaporates… but you know that, if you’ve ever watched a heist movie.

I’m not 100% sure, but I don’t know how well Pixie will travel to places that revere the Catholic Church, as it is less than respectful of it. The central thrust is, basically, that the Guarda would never search a priest, so they are running the drug business in Ireland and they are heavily armed — as they used the old gun running connections that were used by the IRA.

A quick read back through all that makes me think that you might be wondering where all the comedy comes from.

A lot of it is just in the general chat between the characters, the craic as it is known over there, but there are also some humorous items which might have been intentional, or might just be me overthinking things.

For instance, Pixie’s step-father is called O’Brien and is played by Colm Meaney, who is famously known as Chief O’Brien during his Star Trek days. The first few scenes he appears in, he is cooking — so I thought Chef O’Brien… see what I mean about possibly overthinking things? But there is a definite Tarantino-does-Father-Ted vibe with a shoot out that is an homage to John Woo.

There is a problem which I’ve never come across in a mainstream film, and it is that my usual reference sources (IMDb and Wikipedia) are lacking a lot of the cast and character information. If I had known it was going to be this hard, I would have taken the chance of filming the closing credits! There are no names given for two of the male leads (Daryl McCormack and Colm Meaney), Dylan Moran’s character, and, in some places, Alec Baldwin is just credited as “A Priest’.’ Maybe this is just because no one has got round to filling them in but, again, if I’d known I’d have taken more notes.

But I will say that the cast were all great.

Olivia Cooke was brilliant as Pixie and I wondered why I’d never seen her before. It turned out that I had! She had played Art3mis/Samantha in Ready Player One, which I had only just rewatched within the last week, but she so totally inhabited the part that I didn’t recognise her from before. Colm Meaney and Dylan Moran were their usual great value for money. Ned Dennehy was as scary as the psychotic enforcer/investigator Seamus, as he was as the Duke of Hell in Good Omens. Throw in a marvellous debut for Olivia Byrne as Pixie’s step-sister Summer, and an evil step-brother Mike, played by someone who’s name I can’t find anywhere! Even Alec Baldwin managed to pull off a reasonably robust Oirish accent.

Anyway, I enjoyed Pixie enormously and recommend giving it a watch if you get the chance.

About The Peetimes: Although it’s only a relatively short film I did manage to get 3 good Peetimes. I tried hard to find good Peetimes with no action so you wouldn’t miss the best parts of the movie.

There are no extra scenes during, or after, the end credits of Pixie. (What we mean by Anything Extra.)

chevron_left Is there anything extra during the end credits of Pixie?
New Movie Review – 2 Hearts chevron_right