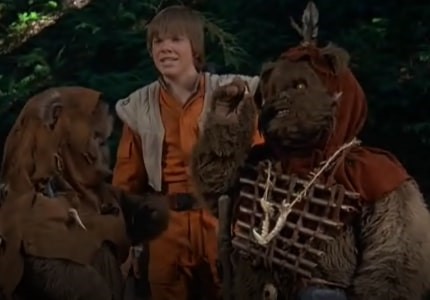 Because I’m a completist, I decided to watch everything Lucasfilm put out about Star Wars. Even if it sucks. I’ve got the atrocious yet fun Star Wars Holiday Special under my belt, plus The Battle for Endor (just bad bad bad), and now mockumentary Return of the Ewok (terrible production values, but enjoyable). RunPeep Rob recently sent me the link for Caravan Of Courage: An Ewok Adventure (the 1984 Ewok TV film taking place just before  An Ewok Special 2: The Battle for Endor). So I have no excuse to skip this. Thanks a lot, Rob! 😉

Shall we see how this official George Lucas offal stands up to an adult’s first time viewing?

Comments on Lucasfilm’s Star Wars: Caravan of Courage while watching it live:

End of the first 45 minutes. Only an hour left to go. Why do I review these things?


I ‘m really glad that’s over. I had to “Force” myself (get it?) to watch this because The Battle for Endor was so bad. This was slightly better.

So:  the Ewok’s 1 & 2 watch is done now and I’m ready to move on to the animated Star Wars: Rebels (2008) and The Clone Wars (2014)… If I can find some cheap/free copies without subscribing to Disney+. Those SW series are supposed to be pretty good (great scores on Rotten Tomatoes), considering how dumb the Ewok 1 and 2 live action movies were and how truly cracked the SW Holiday Special is.

Star Wars: Caravan of Courage is suitable for really young kids who looooove Ewoks. Adults can safely skip both Ewok movies, or otherwise play them in the background while you clean the livingroom. The Holiday Special is lots more fun if you want to expand your Star Wars world-building and can tolerate just how bizarre it is.

The Star Wars Holiday Special …Is it really that bad?