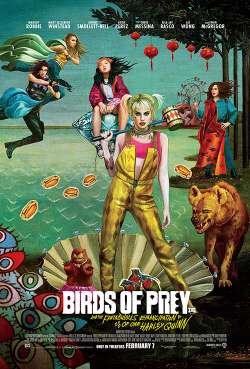 What Birds of Prey lacks in story it makes up for — mostly — in humor and action.

Margot Robbie single-handedly saves this movie from toilet of underachieving movies. And let’s face it, no one is going to see this movie for any other reason than Margot’s wickedly perfect personification of the pseudo protagonist — Harley Quinn.

The entire script revolves around giving Robbie ample opportunities to flash her psychotic smile and primal violence. And she does that exceedingly well.


Props must be given to Jonathan Eusebio.

“OMG! You call yourself an action/superhero movie fan and you don’t know who Jonathan Eusebio is?” Okay, I honestly didn’t either until 15 seconds ago. I had to look up the stunt coordinator for this movie because it was brilliant. Harley Quinn’s fighting style perfectly befits her personality. Turns out, you’ve seen much of Jonathan Eusebio’s work. He was the stunt/fight coordinator for John Wick: Chapter 3 – Parabellum, Deadpool 2, Black Panther, Fast & Furious 8, John Wick: Chapter 2, Doctor Strange, etc.

The Academy Awards snobbishly don’t recognize categories for stunt coordinators and stunt people in their awards, but they absolutely should. But hey, Jonathan Eusebio, I got your back. I think you deserve the first “Kapow”. (Award for best stunt coordination in a feature film given out by RunPee.)

However, despite the brilliance of the stunt work and fighting choreography, the screenplay for this movie lacks cohesion. It relies on voice-over flashbacks to provide the bulk of every character’s back story, and comes off as cartoonish. It’s not awful, but it’s far from good.

About The Peetimes: We only found two Peetimes, but they’re both good. Neither Peetime we chose has any action scenes or much comedy.

There are extra scenes during, or after, the end credits of Birds of Prey: And the Fantabulous Emancipation of One Harley Quinn. (What we mean by Anything Extra.)

Rated (R) for strong violence and language throughout, and some sexual and drug material
Genres: Action, Adventure, Crime

chevron_left Is there anything extra during the end credits of Birds of Prey: And the Fantabulous Emancipation of One Harley Quinn?
Movie Review: A Star Wars Ewok Adventure – Caravan of Courage chevron_right