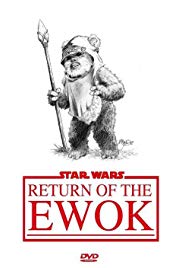 I’ll start this mini-review saying Return of the Ewok is quite sweet, if you can get your hands on a copy — even the bad one currently up on YouTube. This fun little 25-minute mockumentary features Warwick Davis as himself and Wicket the Ewok (inserted Forrest Gump-like) into various scenes of Return of the Jedi. There’s also many wonderful bits with the beloved and renowned Star Wars actors in fake ‘behind the scenes’ moments.

This is worth a quick view if you’re a Star Wars geek.

Return of the Ewok — why bother?

I’m going through this phase of watching everything Star Wars I can get my hands on, whether they’re good or not. For example, I recently watched the new TV series by Disney+ —  The Mandalorian. That was extremely good. Then I watched The Star Wars Holiday Special, which was not good at all, but at least had the redeeming value of being singularly insane. It’s Lucasfilm at its cracked-out best, and is deeply, deeply weird. If you’re a fan, give the Holiday Special a watch just to fill your Star Wars dance card.

Looking around for what to watch, I found a rare and bad copy of 1982’s Return of the Ewok online. <—– You should try to watch this now, but don’t be surprised if it’s taken down. This featurette is unusual stuff: Warwick Davis plays both himself and Wicket the Ewok in this low-rent fake documentary (a mockumentary, actually) of how young, unknown actor Davis needed work  in LA…and ran aground of Star Wars. This little special is short (25 minutes) and amusing. Here’s my commentary as I watch it.

Return of the Ewok Commentary, as I watch

Down to the home stretch

The Star Wars Holiday Special …Is it really that bad?

chevron_left Is there anything extra during the end credits of Gretel & Hansel?
The Most Personality-Driven AI in Cinema chevron_right