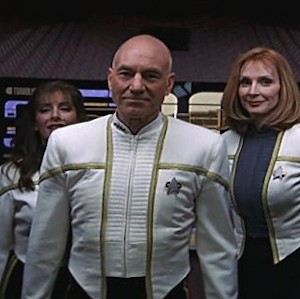 Insurrection is one of those movies that you kind of forget about after seeing, which explains my inability to get this review out on time. It’s very…lightweight. To its credit, it feels like a middle of the road Star Trek: The Next Generation episode. I say credit, because a middle of the road TNG ep is still a very fine thing.

A fun Next Generation outing

This is the most comic and lighthearted of the four Next Gen movies. A quick overview:


If you haven’t picked up on this: I prefer my Trek to be fun and lively, about exploring both the outer universe and the inner human condition. My favorite element of Star Trek is the positive, hopeful vision of our future as a species. If things go dark in Trek, then it has to be top-notch storytelling that fits into the Trek-verse, like The Wrath of Khan.

So Insurrection is fine with me as a fluffy, enjoyable story that feels like a two-part episode of TNG. It has very little to say, but at least all the characters have something to do. (Except Dr. Crusher, but that is par for the course with TNG.)

All of this has happened before, and all of this will happen again…

The Insurrection plot is recycled with elements from previous TNG eps, most especially Homeward, Who Watches the Watchers, Ensigns of Command, Thine Own Self, and Journey’s End.

1. Homeward: A secret relocation of people in a secret holodeck simulation. Picard was HUGELY against the idea, but it was forced upon him. Worf was intimately involved. They could have mentioned it: a missed connection.

2. Who Watches the Watchers: This is the original duck-blind episode. The local ‘proto-Vulcan’ Mintakans find out about it, just like here in Insurrection, and Picard has to step in and manage things. One welcome bit of continuity with Insurrection was seeing the Mintakan tapestry draped over Picard’s ready room chair. I guess that counts as connective tissue to Watchers, if you’re astute enough to catch it.

3. Ensigns of Command: Data has to make the residents of a doomed colony leave the planet. They just won’t go, and the rest of the episode has Data trying to move them before the bad guys exterminate the people and take their world.

4. Thine Own Self: Data forgets he is an android and bonds with a Bronze Age village child, in a decent character study that didn’t need to be echoed here.

5. Journey’s End: The BIG forced relocation episode, where Picard, much to his dismay, has to coerce the evacuation of a group of Native Americans who refuse to leave their sacred homeland. Trek does a lot of allegory, but this one doesn’t bother to veil it.

You could consider viewing all of these before rewatching the movie and see what you think.

For all this, Insurrection is surprisingly fluffy

Upon rewatch, I realized I recalled almost nothing from Insurrection… and it was like being gifted with a brand new episode. I didn’t think much of this movie the first time I saw it (really, really: there’s barely a Picard Speech). It’s weathered pretty well — looks good, everyone is in character, and forced relocation is a topic worth re-examining in our times.

There’s also some nice character continuity from the series, especially with Geordie, Deanna & Riker, and Data. Worf, as usual, is a hoot.

The problem is that there really are only 600 people on what seems to be a massive planet, full of natural resources and great beauty. But once you picking at the greater consequences of this film, Insurrection entirely falls apart.

The premise here is so huge, so momentous — it boggles the mind that this wasn’t explored properly. Those people could have kept their village — or even an entire continent — and shared the rest of the planet with everyone, with proper oversight and management. I’d like to think this happened offscreen afterwards, but Nemesis makes no mention of it, and the “future” episodes in the various series don’t either.

It’s a big can of worms, or gagh, if you will. So…now the universe has a way to cure sickness and reverse aging. To become immortal, possibly. Billions of beings could benefit from spa days there. The ill, aged, and infirm could have special hospitals to heal them and give them their lives back. Doctors from all over the galaxy could study there, and try to duplicate the effects for off-worlders.

And clearly, an absolute top asset like this would have to be protected from invasion. Sharing freely with all might eliminate such a pesky problem, and encourage peace treaties with Romulans, Cardassians, beings from the Gamma and Delta quadrants, everyone — possibly bringing a Pax Romana of unparalleled magnitude to the galaxy. This cannot and should not be hoarded by a few, Picard Speech notwithstanding.

Shouldn’t the Enterprise be on the front lines of the war?

Along those lines, and also important: why is the flagship of the Federation even here? There was a quadrant-spanning war in play with the Dominion, and we were losing. Data should not have been on the duck-blind project at this time, which kicks off the movie in the first place.

The Enterprise should have been near the Wormhole at Deep Space 9, not hosting cocktail parties for delegates. (As amusing as that scene was.) Imagine a cross-over with Sisko, Admiral Ross, and Klingon General Martok. Data meeting Odo. Or an ensemble scene at Quark’s Bar, where the crew gets a little downtime and plays darts with their old friend Miles O’Brien. Ahhh, what should have been..

The Dominion War is name-checked a few times, which I appreciated, but it wasn’t enough. And Worf especially was a major player in the War. I get that Michael Dorn was needed in a TNG movie, and he did have some fun moments in the film, but…really?

If you’re a big Trek fan this is all incongruous and inappropriate. But If you can let go of the larger world-building, it’s one of the two most decent Next Gen films.

I won’t be mentioning the villain in Insurrection because he’s lame: just another hothead on a vendetta. The fallen admiral is also a trope that’s been overdone even in The Original Series days: do all admirals start making shady deals and forgetting the reasons they joined Starfleet in the first place?

These problems keep this film from the A range, but the more comedic breather from the deadly serious bookend TNG movies elevates things.

I wasn’t sure if this was a B or B+ movie, to be honest. I ticked it up to the + because it’s still nice Star Trek, even if it’s forgettable. Some of the movies in the Trek oeuvre don’t feel like Star Trek at all, and that moves these films into the unforgivable range, at least for me.

Note: The music was composed by Alan Silvestri. If you loved Avengers: Endgame, you know his epic style (See: Portals). Anyway, I was excited to see his name in the credits.

About The Peetimes: Three Peetimes here. The 1st is the best and the 2nd is good too. The 3rd is for Emergencies and is also an Alert Peetime with a slightly grotesque scene you might not want to see.

There are no extra scenes during, or after, the end credits of Star Trek: Insurrection. (What we mean by Anything Extra.)

What is Gagh, you ask? Glad to answer.

What to rewatch before Star Trek Picard