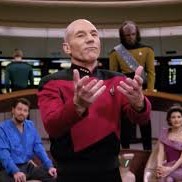 Jean-Luc Picard is back!

I’m so excited that I have to repeat this: He’s BACK! Sir Patrick Stewart announced yesterday at the Las Vegas 2018 Star Trek Convention that he’s ready to take back up the mantle of intrepid Renaissance man Jean-Luc Picard in an upcoming Star Trek series on CBS All Access. Well, frak; looks like I’m going to have to sign up and pay for that platform now.

Will he still be a Captain? An Admiral, or a Starfleet Professor? My guess is he’ll move on to the Ambassador role he played at the end of All Good Things. Picard’s a huge diplomatic asset to the Federation, and I think the beloved Captain, once he’s moved on from Captaining (last seen in that role in 2002’s feature Trek film Nemesis), would head down the road of peace between peoples, using his famous Picard Speeches to pave the way.


We see glimpses of other things that came to pass in that otherwise benighted film – Kathryn Janeway has become an Admiral (with a specialty in Borg Knowledge, if Voyager series finale Endgame is to be believed).

I’m also thrilled to return to the 24th century, where humanity have evolved into a more enlightened state and the future looks hopeful. By the 24th century, humans live mostly at peace with their neighbors (Borg and Dominion Wars aside); poverty, hunger, and most illnesses have been eradicated, and we live in a Post-Scarcity dream world where the greatest mission of an individual is to explore and improve one’s self.

I’ve avoided CBS’s Star Trek Discovery almost completely (I did view the free episode). It’s dark, it’s grim, it’s a big downer. I turned my attention to Seth McFarlane’s The Orville instead: a playful, Next Generation-lite tribute to Trek. Even my mother loves it, and she’s not a science fiction fan as such.

More to relate as 2019 gets closer. But I did want to let Trek fans know that Captain Picard is a thing again!!! SQUEEEEE!