What to rewatch before Star Trek Picard

I haven’t seen the new Picard show yet, but I’m extremely excited, and according to the trailers, it picks up where the long-running (non-JJ Abrams) Star Trek TV and movie series left off… Just 20 years later. And Patrick Stewart, like the rest of us, are 20 years older. Will Star Trek: Picard, be a worthy return to the 24th century?

It’s time to recall and rewatch what Star Trek episodes and movies that focus on Picard, the Borg, Picard’s family, more Borg, and the characters we expect to see in the new series (like Data/B-4, Hugh, and Seven of Nine, although Stewart announced we’ll see cameos from everyone eventually). Plus, some Borg.

You’ll want to catch up on some of the important episodes from The Next Generation and Voyager. If you just want to focus on the Picard themes, you can cherry pick here and there off the Voyager list. I’ll assume there be some sort of introductory exposition for the characters we haven’t seen in (literally) decades, but if you really want to enjoy a show about Jean-Luc Picard, it’s time to get caught up with the good captain and all the trauma he’s been through on and off the bridge of the Enterprise NCC-1701-D (and E). 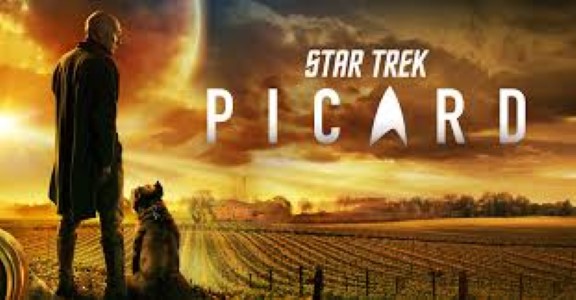 Boldly Making It So

The Next Generation: (With our MUST SEE guesses in bold)

Encounter at Farpoint 1 and 2 (Not a great series premiere, but it introduces and sets the stage for everything to follow over the years. Also, we meet Q for the first time. If you don’t watch this, the must-see series finale All Good Things won’t make as much sense)

Q-Who (Q again, and our first run-in with The Borg)

Samaritan Snare (With a weirdly amusing Geordi La Forge A-story, you have to bear with me here. “We look for things. Things to make us go.” Remember that? The B-Story, about Picard’s Starfleet Academy days, is important. You can skip it and go right to Tapestry, however, which tells the same story and also has Q)

Measure of a Man (The best Data episode and an important look at Federation values. This is a must-see to understand Data before catching the Picard show)

Yesterday’s Enterprise (Because if you’re going to all this trouble, don’t skip one of the best episodes ever, in an alternate timeline that may come into play)

The Offspring (A fantastic look at Data’s loneliness and how he tries to make a family of his own) (NOTE: After watching four episodes of Star Trek: Picard, I’m upgrading The Offspring to a must-see. The title is even name dropped in the Picard pilot by…someone important)

Best of Both Worlds 1 and 2, plus Family (as a trilogy) A MUST SEE. Among the Star Trek’s finest hours. And will absolutely come into play in Picard. If nothing else, you must see this trilogy. Or else, why the hell are you bothering with a show about Jean-Luc Picard?

Brothers (All about Data, and his brother Lore)

The First Duty (Note: After seeing the first few episodes of Picard, it became clear that this is a must-see to understand the Federation and Starfleet. I should have guessed this last summer during the 2019 San Diego Comic Con, as the fabulous downtown Jean-Luc Picard Museum was entitled The Last Duty. Silly me. I totally get it now: “The first duty of every Starfleet officer is to the truth, whether it’s scientific truth, or historical truth, or personal truth! It is the guiding principle on which Starfleet is based, and if you can’t find it within yourself to stand up and tell the truth about what happened, you don’t deserve to wear that uniform.”)

The Drumhead (An ouchy interpretation of Picard’s choices over the years and how they could be seen in a negative light. It name-drops a lot of previous episodes to remind you how far we’ve come) (NOTE: I’m turning this one into a must-see after watching the Picard pilot episode and the very uncomfortable interview he sits through)

I, Borg (Hugh the Borg — played by Jonathan Del Arco — is supposed to show up in Star Trek: Picard. Also, Locutus is name dropped)

Descent I and II (A flimsy two-parter that no one likes, but it’s got Hugh the Borg in it, plus Data’s brother Lore)

Future Imperfect (This is a Riker piece, but it provides an “alternate future” that is certainly interesting. Like Tapestry, All Good Things, Timeless and Endgame, this episode provides possible futures for different characters)

The Inner Light (The Best Star Trek/Picard episode EVER. I will hear no argument. Generations tried to do this again…and failed miserably. You still have to see both though. Like Best of Both Worlds/Family, you can’t skip it. I hope we get to see the flute)

Chain of Command Part 2 (Just to show another trauma Picard probably hasn’t overcome yet. Understandably. Patrick Stewart at his best: THERE ARE FOUR LIGHTS!)

Tapestry (Another It’s a Wonderful Life look at Picard)

All Good Things 1 and 2 (It’s a Wonderful Life again, plus Q… Plus this series finale rocks on any level known to man)

I’ve given this plenty of thought and I’m not sure anything from DS9 needs to be seen to understand STP. I might recommend In the Pale Moonlight to better understand the state of the Alpha Quadrant during the Dominion War, and how the Romulans got dragged into it. Also, you get the immortal line: “It’s a faaaaaaaake!”

DS9 is the most serialized of all the 24th century Treks, and it’s hard to watch this series piecemeal. As long as you know Starfleet got pretty decimated by this extended, grueling war, you’ll be up to speed.

Voyager: (Expect most of these to be Borg-crucial)

Message In a Bottle ( A rare non-Seven, non-Borg episode showing how lonely the crew of Voyager is, and allows for a crowning moment of awesome by our favorite EMH – Robert Picardo, the Emergency Medical Hologram. It’s also pretty funny) (NOTE: There are plenty of holograms in ST:Picard. Message in a Bottle will help to understand how the EMH and some others became sentient…also, Romulans!)

Scorpion 1 and 2, plus The Gift (a fantastic trilogy about Jeri Ryan as Seven of Nine, and a must-see)

Timeless (Another future reality episode that provides insights into the future of the TNG and Voyager crews. Also, the 100th episode, with a cameo of Captain Geordi La Forge!)

Prey (Remember Species 8472? I doubt they will come into play, but you never know. It’s a cool episode and provide an enemy even the Borg fear)

One (Can a Borg survive a month without companionship? The answer is pretty much no)

Drone (Seven makes a Borg baby. Nothing hits Seven as hard as the climax: “Please, you are hurting me.” “You will adapt.”)

Survival Instinct (Good background on Seven of Nine and her fellow Borg crew, once separated from the collective)

Imperfection (One of the best looks at what drives the Borg in a spiritual way. It’s amazing when Seven sees a glimpse of “God”)

Someone To Watch Over Me (Charming, sweet, sad, and one of my favorite episodes in Trek lore)

Author, Author (I’m adding this one after watching the first four eps of ST: Picard  — it’s helpful to know about the [lack of] rights of holograms and synthetic beings — this one is Voyager’s version of Measure of a Man)

Human Error (Do we have to accept the Seven-Chakotay pairing as cannon?)

A “mix tape” of some great Seven of Nine moments:

Whether you liked them or not, these uneven films are considered canon.  I tried to disavow a few developments in Generations and Nemesis, but the Picard show confirms these are all materials we have to accept as true. So yeah, Robert and Rene Picard are dead, some stupid things happened with Planet Remus, and there’s a miserable Picard clone to deal with. Plus, there’s Data’s emotion chip, the thing that happened in Nemesis, and B-4.

Make yourself rewatch the following TNG era films (you can skip the The Original Series movies) if you want to understand the current Picard and his late-life mindset, alone in the wineyards of Chateau Picard.

Anything in bold is a must-see to understand Jean-Luc Picard’s mindset after leaving the Enterprise-E.

And now, for the TNG films you need to see:

Generations (Why do we keep reprising It’s a Wonderful Life with Picard? Whatever… You have to see this anyway, because his family plays a big part)

First Contact (The best of the Next Gen movies, and it’s all about the Borg!)

You can totally skip Insurrection. YAY!

Nemesis (Awful movie, but you need to know what happens at the end of the official TNG run, and meet B-4. And there’s a fun Admiral Janeway cameo)

The movie Star Trek 2009 is now important, believe it or not. The Kelvin Timeline is now canon within the Prime Timeline. Remember what Spock was up to in TNG’s Unification parts 1 and 2? That leads into Prime Spock’s attempts to help the Romulans in 2009…which you’ll need to know to follow Star Trek: Picard.

(BONUS VIEWING: If you want to follow Spock’s latter day storyline, watch TNG’s Sarek and the Unification 2-parter, followed by the three Kelvin Timeline Star Trek movies directed by JJ Abrams. And finally, if you want to see some of the best Romulan stories, check out The Original Series’ Balance of Terror, and Next Generation’s The Defector and The Enemy. Oh, by the way…ST: Picard has many, many Romulans in it. Which isn’t a spoiler, since that theme picks up right away.)

Oh, hello there Commander Tomolak! “Shall we die together?”

Here’s a blast from the past, and our FIRST look at the Romulans, in Balance of Terror:

If nothing else, make sure you see The Measure of a Man, The Offspring, The Inner Light, The Best of Both Worlds/Family, All Good Things, Generations, First Contact, plus Nemesis and Star Trek 2009. And Seven’s big Voyager trilogy (Scorpion 1 & 2, plus The Gift). You don’t have to like each episode or movie. But I do recommend you understand them.

I’m annoyed as hell that CBS All-Access is trapping the Picard Show on their payola premium channel. I’ve avoided Star Trek Discovery on the same channel because it’s awful and I prefer The Orville, but I need this new infusion of Jean-Luc Picard. He’s my personal hero  — a man who I aspire to be like, or at least marry. And I miss Seven as well. And Data.

Don’t spoil things, folks! I’ll review the series when I can afford to run the CBS show. Damn it all. Premium channels my ass. And now The Orville is moving to Hulu. SIGH.

Star Trek The Next Generation – Playing Poker with Superheroes