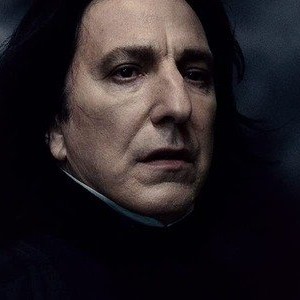 One of the big things that actors worry about is being typecast. No matter what, they are always worrying that they might become “That guy off Star Trek” or “Oh look! Now we know who the baddie is.” They might be a very believable alien or a credibly naughty person, but they’ll never be taken seriously as anything else. Some then go on to accept their lot and keep on cashing the cheques, whilst others try to break out of the straitjacket and end up as a caricature of themselves.

Then there are others who can move seamlessly between genres. One of the latter types was Alan Rickman.

Maybe he learnt this skill in his real life; born and raised on the boundaries of the West London boroughs of Hammersmith and Fulham, and Ealing his education choices and pathways were… inconsistent. He left the sixth form with science ‘A’ Levels but then went to college to study Graphic Design. With some friends, he set up a successful graphic design consultancy called Graphiti. But then, after a few years, he was bitten by the acting bug and went for an audition at RADA. Despite his relatively advanced years (26) he was accepted and, I’m very glad to say, he stayed with drama.


Yet another Royal Shakespeare Company Alumnus

I’ve mentioned before that I’ve found RSC alumni tend to be very watchable and enjoyable actors and guess what… Alan Rickman is an RSC alumnus! Having said that, he isn’t too enthused by the way they treat their students. He joined in 1978 and appeared in The Tempest and Love’s Labour’s Lost, among others: “It’s a factory,” he said. “It has to be. It’s all about product endlessly churned out—not sufficiently about process. They don’t look after the young actors. … People are dropping like flies, doing too many shows at once. There ought to be someone who helps them develop.”

Probably his biggest role with the RSC was the male lead, the Vicomte de Valmont, in the 1985 production of Les Liaisons Dangereuses. The production transferred to the West End in 1986 and Broadway in 1987, and despite receiving both Tony Award and Drama Desk Award nominations for his performance, the film role went to John Malkovich, probably due to the studios needing a “name”they knew.

Moving on from the RSC, Rickman spent much of the rest of the 1980s acting in BBC serials, radio dramas, and repertory theatre. During these years he appeared in dramas, comedies, period pieces, and classic spy thrillers, which is, presumably, how he developed his range and flexibility. But his first few films seemed set to pigeon hole him as a bad guy (he is the only actor to make it onto the Empire Greatest Villains list twice) starting with his cinema debut as the deliciously villainous Hans Gruber in Die Hard.

(His other win for the list is the delightfully weird Sheriff of Nottingham in that otherwise lifeless Kevin Costner vehicle Robin Hood. Note that Snape isn’t on the list. Is Snape ultimately a villain? What are your thoughts?)

Hans Gruber is an amazing villain. There are articles, essays, and features still being written and read, about him over thirty years after his fatal plunge off the Nakatomi Tower. Gruber is sophisticated (the way he identifies Joe Takagi’s suit), adaptable (getting the windows shot out after noticing McClane’s bare feet), and well educated (paraphrasing Plutarch).

However, originally Gruber was going to be a tough, military man similar to the Colonel Stuart character who is the antagonist in Die Hard II. But then the producers were running low on cash after paying Bruce Willis an — at the time — unheard of fee of $5 million, and cast an unknown English actor who had only arrived in Hollywood two days previously…and was cheap.

Besides being cheap, John McTiernan noticed Rickman was svelte, intellectual, and definitely not a simple mercenary, but more like the “exceptional thief” we all came to know and love. Incidents like overhearing Alan effortlessly doing an American accent sent McTiernan and the writers scurrying off, and the Bill Clay scene was born. The only problem for the debuting action star was his total inability to refrain from flinching when he had to fire a gun. This is why Hans Gruber only shoots a gun three times in the entire film.

Don’t believe me? There’s your excuse to go and watch it again months before Christmas!

Being a big screen baddie beckoned again in Quigley Down Under, the Australian Western. In this one Alan seems to start off as a reasonable if not actually good guy by hiring the expert marksman Quigley. At first it’s just a moustache off between Quigley (Tom Selleck) and Elliott Marston (Rickman) and both seem to getting along swimmingly. Then, over supper, Marston reveals that he wants Quigley’s superior shooting skills because the local Aborigines have learnt to stay out of his men’s rifle range and they fall out over the whole senseless genocide thing. Marston then does something Hans Gruber would never do… misses the opportunity to just shoot Quigley in the head and employ someone with fewer scruples straight away… the mistake made by evil doers in movies through the years.

But then the fear of typecasting really raised its ugly head… the Sheriff of Nottingham in Robin Hood: Prince of Thieves. The saving grace, as far as Rickman was concerned, was the comedy; he showed himself to be possessed of fine comic timing and only took the role on the proviso that he had free rein. There were quite a few unintentional laughs along the way, but at least the ones coming from the sheriff were supposed to be there.

Actually, director Kevin Reynolds walked out of the project weeks before the release in anger at the heavy editing required to stop Alan Rickman stealing the film from Kevin Costner.

So after those films, an obvious career arc would be that his next role should have been as a professional puppy strangler, but at this point Alan Rickman shows his range. He’s the romantic lead Jamie in Truly, Madly, Deeply. Now I’ve written about this film elsewhere on this site so I’ll just quote Roger Ebert when he called it “Ghost for grownups” and recommend that, if you haven’t seen it, you get a copy, watch it, and have some tissues ready at the end… the ending in Ghost involved sparkling lights and special effects, Truly, Madly, Deeply does it with a rat!

Throughout his career Alan Rickman was capable of portraying many characters all with a genuine warmth and humour: Alexander Dane/Dr Lazarus in Galaxy Quest, Harry in Love Actually (where he easily held his own in a comedy scene with Rowan Atkinson), Ronald Reagan in The Butler, The Metatron in Dogma, Louis XIV in A Little Chaos… sometimes his parts were little more than cameos, but you certainly knew he was there.

One of my favourites is his last on screen role as Lt General Frank Benson in Eye In The Sky. In this he, essentially, plays two roles; one is a hopelessly lost and bewildered grandfather (a role I am living) struggling to get the correct type of doll — “I’ve bought a time to sleep doll when I should have bought a baby moves” — and the other is that of a high ranking army officer arguing with politicians about the ethics of remotely killing a terrorist cell while it is televised live on the screens, before their eyes.

After being berated by a stereotypically wet, liberal politician, he calmly and quietly responds, “I have attended the immediate aftermath of five suicide bombings, on the ground, with the bodies. What you witnessed today, with your coffee and your biscuits, is terrible. But what these men would have done would have been even more terrible. Never tell a soldier that he does not know the cost of war.”

And what manages to make the move from unsure and befuddled, to authoritative and confident, is his voice. Known for his languid tone and delivery, Rickman’s signature sound was the result of a speech impediment when he could not move his lower jaw properly as a child. Two researchers, a linguist and a sound engineer, found “the perfect [male] voice” to be a combination of Rickman’s and Jeremy Irons’ voices.

The BBC stated that Rickman’s “sonorous, languid voice was his calling card—making even throwaway lines of dialogue sound thought-out and authoritative.” In their vocal range exercises in studying for a GCSE in drama, he was singled out by the BBC for his “excellent diction and articulation”. His co-star in Eye In The Sky, Dame Helen Mirren said his voice “could suggest honey or a hidden stiletto blade.”

His death came out of the blue. He managed to maintain a private life and kept the news of his illness a secret which, I think, just goes to emphasise that he was, at heart, a jobbing actor who had turned down many film roles so he could return to the intimacy of his first love… theatre.