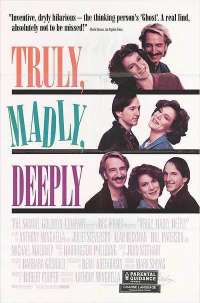 Valentine’s Day is over again and there were many cinemas offering nights for you and your significant other to share a bucket of popcorn, a gallon of pop, and watch a film together. That film is usually Ghost. My response to that is “O.K. Ghost is a decent film that pulls all the right strings but is it the best of that particular genre?” As the more astute among you have probably already gathered, my answer to that is, quite simply, “No”! So what would I chose instead?

Bring on Truly, Madly, Deeply. The story is, essentially, the same: a couple in love, separated by death, brought together via supernatural means, and resolving their situation so they can move on. After that the similarities finish.

Maybe it is reflective of the difference between the USA and UK ways of telling stories but Truly, Madly, Deeply is more laid back, with less razzamatazz…no gangsters, no shootings, nothing over the top (Whoopi!). Also there is the budget disparity…Ghost cost  $22 million, while Truly, Madly, Deeply cost $650,000, with no need to adjust for inflation: both came out in 1990!


Written and directed by Anthony Minghella especially for Juliet Stevenson to showcase her talents for playing the piano, dancing, and the quirky side to her — which she couldn’t express in the classical parts she was famed for playing. Throw into the mix theatre actor Alan Rickman, who had just started making movies, and you get a very cozy fantasy drama which could just as easily have been produced on the stage as on the screen.

The conceit is that Nina and Jamie are a loving couple, but Nina is emotionally shattered when Jamie dies. As she reaches her lowest point of despair Jamie comes back as a ghost, and she is ecstatic. But then ghost Jamie starts exhibiting all of his most irritating characteristics: turning up the heating, moving furniture around, and bringing his ghost friends around to watch videos all night.

Eventually Nina comes to terms with her loss and moves on. That sentence makes it sound as though she gets fed up and that’s it…trust me, it is way more than that! The final reveal is gut wrenching! It might not be all special effects and stirring music, but when it dawns on you that the end has come you’d better have the tissues on standby.

If you get the opportunity watch Truly, Madly, Deeply. You won’t regret it.