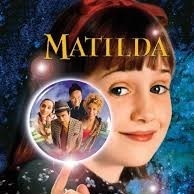 Matilda is the strangest, nastiest kid movie I’ve ever seen. My mother and I were astounded throughout at how grotesque this was, and how unappealing. Not even the cute actress (Mara Wilson) could save this caustic tale.

It wasn’t until I saw the credits that this was based on a classic book by Roald Dahl, that I understood what was going on. This is the author who wrote Charlie and the Chocolate Factory, which if you think about it is even more creepy and mean-spirited. I guess the author had a terrible childhood, where the adults were macabre caricatures?

I decided I had to look this up. As a young boy, Dahl was placed in a boarding school marked by “an environment of ritual cruelty and status domination, with younger boys having to act as personal servants for older boys, frequently subject to terrible beatings,” according to the Wikipedia. He was caned by the headmaster and humiliated by teachers. In his autobiography, he said he never got over such viciousness. One can tell.


Matilda, I’m guessing, is a child’s whimsical wish-fulfillment fantasy along the lines of Annie, where a heroic adult swoops in and rescues the lost but gifted child and gives her the perfect life… and the mean adult gets her just deserts. For a story about a child with powers, it was so dark — not at all like Harry Potter, even though the description seemed similar enough. Roald Dahl fantasy is as deeply dark for kids as Tim Burton type fantasy is for adults.

Roald Dahl’s novels are beloved, but this movie wasn’t funny, or sweet, or exciting, or clever. It was going for subversive, but ended up remorselessly strange. Danny Devito directed and acted in Matilda, so I expected better, but I’m so underwhelmed that I don’t have much to say about it.

I haven’t given an F grade in some time, but here we go. Perhaps if I grew up with the ostensibly classic story I’d have a fondness for the screen adaptation. Apparently, “In a 2017 UK poll of the greatest authors, songwriters, artists and photographers, Dahl was named the greatest storyteller of all time, ranking ahead of Dickens, Shakespeare, Rowling and Spielberg.”

Which, wow. I’m not feeling it. It’s like danging your toes in a pool of algae on a hot day: doesn’t do much for you, does it? That headmaster…she makes Harry Potter’s Dolores Umbridge look like a kindly granny.  I’m more squicked out by the chocolate cake punishment than the black pen that writes lines in your skin.

If the movie was just damn pretty, like Artemis Fowl, A Wrinkle in Time, Ready Player One, or  Valerian and the City of 1000 Planets, I could see allowing Matilda to join the ranks of the D movies…but a pretty movie this is not. Because the kid playing Matilda herself is adorable and did a game job with a poor script, I’m adding a + onto the F grade. I realize this is faint praise.

If you like dark children’s satire, then I suppose this film is for you. Maybe the book is better than this adaptation and it just didn’t translate well. If you’re a fan, I’d love to be educated.

Movie Review – Valerian and the City of a Thousand Planets