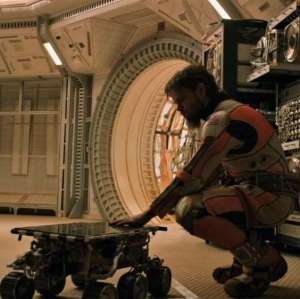 The Martian is a fantastic movie. I just finished watching it for the umteenth time. It’s a masterful work in every aspect. But if I may be so bold, it could have been a little better.

Mark Watney is alone on Mars. No companionship. Not even a stuffed animal. Except for the rover he scavenged: Sojourner. Sojourner was the first robotic/wheeled rover on Mars and has a special place in the history of Martian exploration, befitting the amazing woman it is named after.

There are only a few shots in the movie showing Sojourner wheeling around the habitat where Mark lives. What I would propose is to add just a few moments to illustrate how Mark’s interaction with the little rover evolves into something closer — into treating it like a pet.


Even though Sojourner is only metal and circuits, it’s still the only other animated object on Mars. It wouldn’t be a stretch for Mark to grow attached to it…similar to the role a volleyball — Wilson — played for Chuck Noland  (Tom Hanks) in Cast Away. I would propose throttling back a little on the anthropomorphizing compared to Cast Away, but you get my meaning.

When it’s time for Mark to leave, perhaps he couldn’t resist taking the little rover with him and sneaking it onto the flight to reunite with his crew. Of course, just as in Cast Away, Mark has to sacrifice the little rover to save himself. Perhaps Mark would attach a tether to the rover, slinging it around as a counterweight to toss off so he could drift close enough to the Hermies to be rescued. That would have been poignant and would work, just so long as it’s not overdone.

What do you think? Would that have improved the story, or was it perfect the way it was?