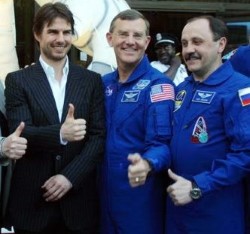 The next mission in the next Mission Impossible will be on the real International Space Station! While the news is super cool, it should surprise exactly no one.

Announced on May 5 of 2020: Mission Impossible star Cruise has partnered with NASA and Elon Musk’s SpaceX to send him off to do his next big stunt on/in the ISS. We can guess he’s wanting to do an EVA too, and people don’t tell Cruise no to anything.

This marks the first time a fictional feature film will be set in outer space. I doubt it will be the last. A lot of movie series are at the point where the set pieces can’t top themselves anymore while tethered to Earth.


How was Tom Cruise going to have a more exciting film sequence than the HALO jump? I’ve been joking that the next Mission Impossible would have to be off planet. Which means really going to space, since Cruise only does real stunts, made by him really doing them. And lookee now. We can have nice things!

Deadline reports that the movie in question might not be a Mission Impossible film. But if it’s not, I think that would be dropping the ball somehow. We’ll have to wait and see. It’s not inconceivable space could be worked into Top Gun 3. (Maverick kickstarts the Space Force?) Or a Live, Die, Repeat 2 , which would make more sense (I know it’s called Edge of Tomorrow, but LDR is just better and was the original title).

NASA Tweeted they hope this exciting development will re-spark humanity’s interest in space travel and a return to landing humans on the moon. They always helped out with movies to make sure NASA was depicted positively, as in Apollo 13, Armageddon, Mission to Mars, and others. This is quite a step up, though, from merely consulting.

The space race in movies had to concede to the mighty might of Cruise to start things off, but there’s still a huge final frontier to explore.

Perhaps The Fast & Furious franchise can head to the moon to race souped up Lunar Rovers in a chase sequence. While that plot’s been done — in the other-wise solemn (Br)Ad Astra space movie  — no one was actually ON the moon. So if mankind returns to Luna, it’s not ‘impossible’ for someone like the F&F team to tag along. What else can you do once you’ve “flown” cars between the three massive skyscrapers at Abu Dhabi? Or parachuted trucks out of planes? A chase scene at the bottom of the ocean is the only thing that possibly could come to mind, besides space. (And while Star Wars: The Phantom Menace did that already, it’s just one odd CGI scene in a big weird movie.)

BTW, enjoy this amazing, hard-to-top moment in F&F 7: “Dom, Cars don’t fly!” Holy frak, is this ever a stellar sequence.

It’s still not outer space. Tom Cruise gets all the fun stuff.

But Vin Diesel is probably pretty ticked off right now.

NASA is excited to work with @TomCruise on a film aboard the @Space_Station! We need popular media to inspire a new generation of engineers and scientists to make @NASA’s ambitious plans a reality. pic.twitter.com/CaPwfXtfUv

Should be a lot of fun!