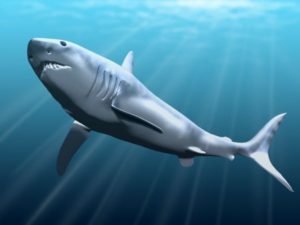 Megalodon, meaning big tooth, is an extinct species of shark that lived approximately 23 to 2.6 million years ago. For reference, the age of dinosaurs (Mesozoic Era) was 245-66 million years ago — so, 43 million years separated megalodon from the dinosaurs. It’s a fish, not a dinosaur, for your distinction. Just a mega-sized one. And, yes, although it is classified as Extinct, that doesn’t mean there isn’t some sort of hold out in a kind of “lost world scenario — its happened before. We can allow this this conceit without too much suspension of disbelief. Okay so far?

It was this big Megalodon wasn’t just gigantic compared to other sharks; it was gigantic for any marine creature, ever. Fossil records indicate it was up to 59 feet (18 m) from nose to tail. The Megalodon in the movie The Meg is 75 feet (23 m) long. That’s only 27% larger than what the fossils indicate. By Hollywood standards that’s remarkably conservative, especially when you consider that, while not widely accepted by the scientific community, some marine biologists believe Megalodon could have been even larger than The Meg, reaching lengths approaching 82 feet (25 m). (Maybe the creators are saving the ridiculously large Megalodon for Meg II.) [pullquote position=”right”]The Megalodon isn’t the only titanitifish — I made that up just now — to get the Hollywood Treatment. [/pullquote]The Mosasaurus from Jurassic World was shown chomping on a Great White Shark (as a little Sea-World type “treat”) early in the movie, and then later taking down the Indominus Rex, of which there was no real contest. Mosasaurus was a big gal in the Jurassic World films! It is estimated to have been around 56 feet (17 m) long, roughly the same size of a Megalodon, depending on which scientific paper you put the most stock in. Quick aside: the Mosasaurus isn’t a dinosaur. It’s an aquatic lizard. Although I doubt if the victims of its appetite had any concern for that distinction while being digested. 😉

Never ask a female Megalodon her weight It isn’t just the length of the Megalodon that is “jaw” dropping. Its weight is truly unfathomable. Male Megalodons had an estimated mass with an upper bound of around 34 metric tones (75,000 pounds). Female Megalodons were considerably larger than their male counterparts, at 60 metric tons (132,000 pounds). [pullquote position=”right”]Therefore, realistically speaking, the Meg in question would almost certainly be female.[/pullquote] 132,000 pounds is as meaningless as saying it’s 239,000 miles (384,000 km) to the moon. Those numbers are too far outside the realm of experience to grasp. A better way to comprehend the size of a female Megalodon is that it is about 735 times larger than a 180 pound (82 kg) man. If it helps, consider that a 180 pound man is about 735 times larger than a newborn kitten. Therefore: a man is to Megalodon as a kitten is to a man. (With the notable difference: a Megalodon doesn’t look at a man and think, “Awwww, how cute.”…so much as “Mmmm. Scooby Snack”.)  🙂 Teeth. We need more Teeth…

An upper anterior megalodon tooth has been found whose height is 7.25 inches (18.4 cm) , one of the largest known tooth specimens from that shark. By comparison, the T-Rex had teeth that were slightly longer, 9 inches (23 cm) long. However, they were long and thin in comparison to the broad, flat, teeth of a ‘meg’ shark. Thus by mass, the Megalodon had far more massive teeth.

Not only did Megalodon have huge teeth, it also had a lot of them — approximately 250 serrated teeth in a mouth as big as 6.6 feet (2 m) across. The T-Rex had about 50 teeth. Big difference to scientists, but less comforting if you’re the chompee. Must go faster… A study linking shark size and typical swimming speeds estimated that Megalodon would have cruised at 11 mph (18 kph), but would have been able to achieve much higher speeds in short bursts. Habitat is crucial to the story The majority of Megalodon fossils have been discovered in warm waters. It is believed that oceanic cooling, associated with the onset of the ice ages, coupled with the lowering of sea levels and resulting loss of suitable nursery areas, may have contributed to its decline. Also, a lot of its larger prey species died off.
Facebook
Twitter
Pinterest
LinkedIn