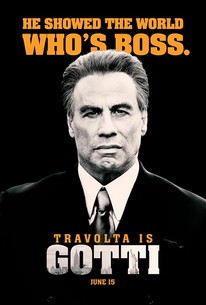 Gotti has been out a few weeks now, and all the reviews have trickled in (including ours)…and [pullquote]the John Travolta crime mob vehicle, written to document the rise and fall of a famous Gotti family, fails in almost every way.[/pullquote]

I say almost, because Travolta really does a great job in his acting choices as the infamous Gotti himself. He throws himself into the role without reservation. He’s probably the only reason to see this film, because its so poorly written, directed, and stands out by way of general filmatic awfulness. Bummer.

[pullquote position=”right”]Such a bummer, in fact, that aggregator Rotten Tomatoes awards it a rare and uncoveted ZERO rating/score. This means not one of the submitted reviews for Gotti are positive. To be honest, the movie sucks, and everyone knows it.[/pullquote]_
-----Content continues below------


To be clear, this is the critic score. Audiences gave it a half mast salute at 59%. There’s often a divide between critic and audience scores (remember the furor over The Last Jedi?)… but this audience approval rating is still in the C+ area — not exactly a show of rousing support.

A zero rating, though? This is unfortunately not the first time Travolta has to suffered such ignominy. He’s had goose eggs from Staying Alive , the tepid sequel to Saturday Night Fever, and the really silly Look Who’s Talking Now (the one with the dogs).  These films have a zip rating (the links above go right to the proof). These movies aren’t just bad — they are officially scored as abysmal!

It’s unfortunate, as Travolta CAN act. He had a nice comeback with the iconic Pulp Fiction, and the cutely pleasant original Look Who’s Talking. I think his problem is accepting poorly made scripts. That might be his weak spot; I can also think of a few movies he’s done that are kind of embarrassing (ie, Battlefield Earth, ouch!).

There are entire posts on the web, devoted to listing Travolta’s worst movie choices:

The Five Worst John Travolta Movie Roles of His Career

So, should you see Gotti? If you’re a keen historian of the Gotti mob family, then maybe. But don’t pay money to see it in the theater. You’ll be able to stream it soon enough, and will have the benefit of stopping the show and doing something else if you find it as muddled and sloppy as we did.

If you like stories about the Mafia, try these books instead: