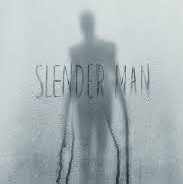 I can’t wait to see Slender Man. My adult daughter and I have been hearing stories about “The Slender Man” for years, and my inquiring mind wanted to know more.

Origins
Believe it or not, he isn’t centuries old, being kept alive by generations of families passing down the warnings and stories around a candlelit table. No,  this phenomenon was created on the Internet.  He was envisioned on June 10, 2009 by Eric Knudsen (aka Victor Surge), for a Photoshop contest. Something Awful Internet Forum challenged people to create a paranormal image. Knudsen knocked it out of the park with his submission. Because of one man’s vision, countless Slender Man tales were created to horrify anyone gullible enough to “embrace” the myth. (Of course I never fell for it. Nope, not even once.) And it doesn’t stop with stories. He’s spawned books, video games, and now a movie.

What is Slender Man?
In the dark forest, shrouded in mist and fog, stands a man. He is extraordinarily tall, with a featureless face. His arms are notably longer than any humans’ should ever be. With these branch-like upper limbs, he is able to extend them to taunt, or capture his victims. Slender Man always wears a dark suit and tie, easily blending in with the darkness he prefers. You are most likely to encounter him in the forest, or even an abandoned building, if you dare to seek him. But beware. Anyone brave enough to try and meet him will most likely develop what they call, “Slender Sickness.” Proximity to Slender Man causes a rapid onset of paranoia, nightmares, and delusions that are accompanied with nose bleeds. Are you interested yet? Perhaps a nice moonlit walk through the forest tonight?? Let me warn you: he seems to cause chaos no matter where he appears. This leads me into my next story.


On May 31, 2014, two 12 year old girls from Waukesha, Wisconsin took a fellow classmate out into the woods and stabbed her 19 times. That’s a lot of stabbing, folks. These girls claim that they were doing it as the first step to becoming proxies for the Slender Man. Have they never heard of gift baskets? I mean dang, 19 times? Perhaps a monthly delivery of some Omaha Steaks? It’s fairly priced. But no, they chose that method. But here’s the cool part: that little girl, dripping in her own blood, crawled out of that forest, by God, and made it to a road and was found. Yep, she’s alive. She’s ALIVE! Needless to say those messed up little girls are now staying for a very long time in a mental hospital in Wisconsin. There is a plethora of information on this if you want more details. It was a really sad event. Wikipedia is the best place to start.

Back to more of what one photo created. In 2012, a game called Slender: The Eight Pages, was released. In its first month it had over two million downloads. Can we say instant hit? There are games that have developed from that game. The list goes on and on. Many movies and documentaries have been done over the years, but I am waiting for one thing. Slender Man. In theaters tomorrow. I will be there front and center, waiting to see what they have come up with now.