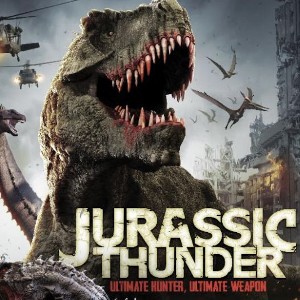 Fancy something totally bizarre and ludicrous? Jurassic Thunder is your baby!

So you have a secret base with weaponized dinosaurs… I’ll just let that sink in for a second.  As if dinosaurs weren’t scary enough, imagine a T-Rex with a huge gun strapped to its head. Then, they are your last line of defense and the only things stopping World War III. Well, them and a group of commandos. That, in a nutshell, is the gist of Jurassic Thunder.

There are some delightfully silly references; one of the characters is named Colonel Sanders (yes, as in KFC), there is an unnamed but distinctly orange president, and there are oblique allusions to The Walking Dead, Star Trek: The Next Generation, Silence Of The Lambs, Predator, Top Gun, and The Russians Are Coming, amongst others. The writer and directors, Mike Davis and Thomas Martwick, obviously know and love films especially in the comedy, action, and FX driven genres.


I couldn’t find any figures for the budget, so I’m not sure whether it’s a low budget film or a spoof of low budget films; the effects are… interesting. By that I mean they are just trying hard enough to be realistic, but not hiding that they are effects. I’ve just re-read that and I know it doesn’t make sense but, if you watch it, you’ll know what I’m getting at.

Another pointer towards Jurassic Thunder being a spoof rather than just cheap is in the acting. This is generally quite good here, and that tends to be where cost savings are made. Particular mention must be made of Heath C. Heine, who has no less than three roles in the film: the President, a commando named Hogan, and a reporter. It’s only after a couple of viewings that you can spot him in two of the roles, because he does manage to play totally different people. The third role is a different kettle of fish because he is working plastered in orange make up, bad hair pieces, and a fat suit, to play the unnamed and unidentifiable (ahem) President.

Stick around for the end credits, as there are a few scenes dotted through them — including Heath C. Heine as said President knocking out some pretty nifty dance moves.

All in all, this is a totally mad piece of cinema which would probably be best enjoyed with a group of friends… sobriety not recommended!