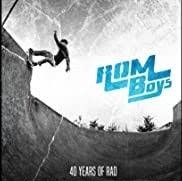 That it has to be well made and entertaining, so that you want to spend the time watching it is a given, but what moves things to the next level is when there is a hook. By that I mean, is the subject something you’re interested in or can connect with either directly or peripherally.

For me, Rom Boys: 40 Years of Cool was a good documentary! It was very well made; lots of passion, love, and commitment from the people involved, which showed through right from the start.


Rom Boys is all about a skatepark built in late ‘70s in Hornchurch, East London. At the time skateboarding was big. Back then I was a newly qualified teacher in Paddington, West London, and I remember nearly every teenage boy was walking around with a skateboard under his arm. The skatepark was designed by Adrian Rolt — who was a big player in skateboard park design at the time — and it was designed as one of the few parks to have all the main features (halfpipe, bowl, cloverleaf, moguls, etc.), when most skateparks only had a selection of them.

Two years later the skateboarding boom was pretty much over, and that’s when the majority of parks were demolished.

The Rom took a different approach and welcomed in BMX riders and, managed by “Big Bad” John Greenwood, managed to keep going. Going on to becoming a listed building, in fact, the first in Europe and second in the world. Actually, after the Bro Bowl in Tampa, Florida was demolished and rebuilt, the Rom is the oldest listed extant skatepark in the world.

I was expecting to see loads of archive footage, current talking head shots of any of the original skaters they could round up. and they’d be interspersed with shots of the kids or grandkids of the old school showing off their skills. And they were all there — and the passion of the skaters and riders, who are now in their fifties and sixties — was obvious and infectious. If I weren’t such a clumsy oaf with nil sense of balance I would have been tempted to jump on a skateboard and have a go myself.

Because that was another element of the film Rom Boys… the old school were still at it!

It reminded me of a documentary I saw about “Dark Side Of The Moon” which had David Gilmore ripping out the stunning guitar riffs — but bald, and wearing a cardigan. There were bald, overweight guys still doing all their tricks. Their enthusiasm for the sport was tangible and contagious. Despite the fact I’ve only ever been on a skateboard for nanoseconds before landing on my back, I was really caught up with what happened to The Rom and the very real drama that unfolded.

I’d grade it an A, but other people who know the place, know the people, know the sport, would start adding +’s!