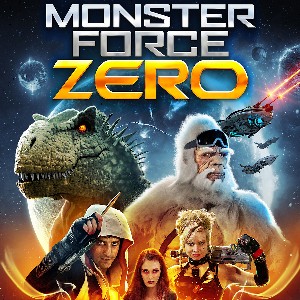 Sometimes you see a poster, a trailer, or a bit of blurb and just think “Yes! Give me a ticket!”. Actually, I think that’s kind of the point… ah well, excuse me having a senior moment! Anyway, Monster Force Zero is such a film.

I’ll say from the start that I’m not a CosPlayer. Not because I think it’s daft or geeky, which I acknowledge it is but, then again, so am I. It’s more because, when I was younger, I didn’t have the time, talent, or money to do it and now I have too many years under my belt. You can only have so much fun going as Alan Napier era Alfred. I do have friends and family that get dressed up and go to conventions and I do feel a bit jealous and wonder if this was going on outside of the USA when I was young enough to enjoy it.

Anyway, enough of my pining for centuries passed. The basic premise of Monster Force Zero is that there is a secret cabal of ancient aliens who have the power to give CosPlayers the powers of their characters. They then have to go and pitch battle with each other until the last group standing has to go and take on, wait for it… a T. Rex!


Yes, it sounds daft and, to a greater or lesser extent, it is but it’s delightfully tongue in cheek and everything is explained which is more than you get from Christopher Nolan! Alright, the textbook used by Calvin “A.I.” Cashill (Adam Singer) is Ancient Aliens by none other than Allen Smithee but at least they made an effort.

As I already said, I have no first hand experience of CosPlay or comic conferences so I don’t know if there are totally made up characters there or not. I know that Monster Force Zero is made up because A.I. is the author and is trying to get the franchise launched but I don’t know if the Destroyers Of Destruction are just made up to avoid punitive licensing fees or if D.I.Y. heroes are a thing but I’ll go with the former. Actually, Final Boss (Dmitri Raskes) is a brilliant, self referential name for a superhero! The funniest character all around is Gunns Lazer (No, I don’t know why it’s spelt like that!) played by Heath C Heine. In a film full of people just going for it and having fun he was the most amusing and furthest over the top!

I’m sure there’s scope for a drinking game or a film bingo because I found references (I think the youngsters call them Easter eggs or such like) to loads of films: Fifth Element, Close Encounters, Karate Kid, Star Trek, Lucy,  and that’s not including the extras/background people in costume or any others that I may have missed.

In short, if you’ve ever partaken in CosPlay or imagined being a superhero, give this a watch.