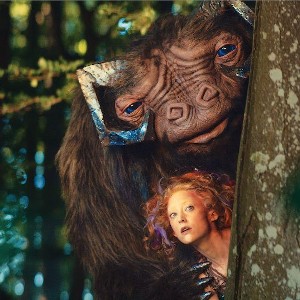 I have to admit to feeling a bit like Groucho Marx over this film… “Why, a four-year-old child could understand this report. Run out and find me a four-year-old child. I can’t make head nor tail out of it.” It’s a family film aimed at feisty, imaginative young girls, and I am far from being one of those. However, I do have one available, so I sat and watched it with my seven year old granddaughter, Alice.

So, Emily and the Magical Journey (USA) or Faunutland and the Lost Magic (UK) or Emily und der vergessene Zauber (Emily and the Forgotten Magic – Germany) or В стране фей (In The Land Of Fairies – Russia), depending on where in the world you get to see it, is a Swedish-made family friendly fantasy. There are lofty ambitions which are only reined in by the Indie status budget. If you go in expecting Labyrinth remade with modern day effects and a budget big enough to get whoever could possibly replace David Bowie, then you will be disappointed. If, however, you go in expecting a family friendly adventure featuring Jim Hensonesque characters, then you will not come out feeling short changed.


While Emily isn’t over-effected, is it actually a family friendly film?

I did wonder whether the nearly fifteen years that have passed since Pan’s Labyrinth may have taken the edge off what is deemed unsuitable for the whole family, and may have brought this into the scary nightmare territory; I did once say Miss Peregrine’s Home for Peculiar Children was fine for an eleven year old, only to be berated by a shattered parent after a sleepless night for the child (I’d forgotten the eyeless Hollows).

Anyway, this wasn’t a problem here. The monsters weren’t too monstrous and the scares weren’t that scary.

That doesn’t mean that it wasn’t an enjoyable way to spend an afternoon. While the story could have done with a bit of tweaking (the secondary storyline of her sadly missed father was not really addressed, and quite casually dismissed), it was beautifully shot and performed, both by the adult cast and the younger ones.

As is often the case, whether the effects land successfully depends on how the actors respond to something that is in actuality not there. It seems unnecessarily churlish to point out that there is an incidence when young Emily spots a butterfly, and her eyes don’t track the insect properly as it flies away.

I suppose I’d better get my expert’s opinion before I start my analysis… Alice thought it was good, very good. When asked why, she said, “because she plays basketball and can see magic.” Was there anything she didn’t like? Alice was nonplussed by Emily (Tipper Seifert-Cleveland) being allowed to leave the table while there was still food on her plate. I said that may have been due to her being with the child-minder (Harriet Slater) rather than her Mum, which led to a discussion about whether she was a child-minder, or an older sister who didn’t live with them anymore. From that I think you can see that it isn’t the storyline that caused problems for the younger viewer.

One thing that did occur to me was how what is entertaining varies according to age. For instance, if someone is sliding down a hillside on a tea tray, then an adult will find the whole concept exciting, whereas a child will just see someone sitting down and shaking about. Where Disney consistently keeps things going for children is by having stuff moving around all the time… why do you think there’re always so many animated tea cups, candlesticks, etc?

I have to admit here that I’m a fan of Scandiwegian TV dramas, and that’s where I’d previously seen some of the cast. For instance, the adult star (also writer and producer) was Jenny Lampa, who I’d previously seen in Bron/Broen and Jordskott. She did a marvellous job as Emily’s mother, Chelsea, and the other worldly Nightinglar; two roles, but she managed to make herself so different that it was only upon reading the credits that I realised she was both people.

I did also notice a couple of, let’s say, for the sake of being nice, homages; there was a moment when a crystal was shown, and the music cue could have come straight from Harry Potter, and when the Belorac (a big hairy beast which does put in an appearance in the trailer) starts speaking, he does sound as though he’d fit into a cantina scene in a Star Wars film.

But, those apart, it was a nice little fairy story; Alice gave it a “Very Good” and I’ll say…