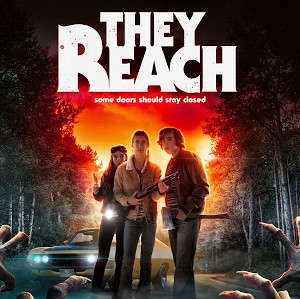 They Reach starts off with Dr Mark Quinnley (Damian Vines) and his son Alex (Taylor Bartle), driving along to do… hmm… who knows? Are they ghostbusters, exorcists, psychic investigators…? It isn’t properly explained. But, as I said, the opening scene is of the two of them driving along, and the son is looking for batteries on the back seat of the car.

Amongst all the clutter is an ubiquitous mystic tome, complete with scribbled notes (why are they written on the text? Doesn’t the good doctor know what margins are for?), a drawing of something that looked to me like the symbol for a transistor rotated through 90°, some old faded newspapers, the aforementioned batteries, and a gun.

Judging by the son’s reaction to finding the gun, this is not going to be a normal day out. Alex spots a scribble he doesn’t recognise: Sanguinem Daemonium. Now, it’s the best part of half a century since I did any Latin, but my guess is that it’s supposed to mean demon’s blood.


So, Demon’s Blood and Stranger Things…

An on-screen graphic announces that the story starts in 1969, and we’ve arrived at an isolated house with a worried mum and a son in the cellar. Cue spooky sound effects, fearful cries, Hitchcock Zooms, and that transistor symbol carved on the boy’s chest, as well as burning its way through the wall. Which brings us up to about three and a half minutes in and the titles! Well… title. There is merely a title page saying Stranger Things. Oops! My mistake. It actually says They Reach, but my confusion is understandable as the typeface is almost identical, apart from some layout shenanigans.

And it doesn’t draw the line at “borrowing” the typeface… the subject matter, main character’s dynamics and age, and small town setting are all in the same general area. Even the period is similar, as we’re moved to “10 years later” soon enough, which puts us in the very late seventies and within spitting distance of the early eighties (where dwells Stranger Things).

I’ll say here and now that I’ve not watched much of Stranger Things but I have run They Reach past an expert in such things; all right… my daughter, Amanda. Her opinion is, yes, the film is definitely influenced by the TV series but it seems like the move from small to big screens has given the director license to, literally, splash out on the gore and splatter.

Now it may sound like I’m being unnecessarily mean and snide, but that’s not my intention. The publicity material does acknowledge that we’re in the tradition of Stranger Things and Stephen King’s It, and let’s be honest…ever since Georges Méliès made Le Manoir du Diable in 1896, horror films have been borrowing from each other to a greater or lesser degree ever since.

So I’m going to come down on They Reach being in the knowing, loving homage camp, rather than the “ooh that’s a good idea, let’s steal it” camp.

So the Easter eggs, as I believe the young ones call them, are there, but subtle enough so as not to be intrusive.

What else was good about They Reach?

The acting was good. The lead was Jessica Daniels (Mary Madaline Roe) and she had a delightfully ethereal, other-worldly quality, which was spot on for the character. At the other end of the spectrum was her feisty, down to earth friend Cheddar (Eden Campbell), who was a joy and a laugh to watch. Throw in a lovely debut turn by Steffanie Foster Gustafson as Marybeth Moonstar — local librarian and white witch.

Honestly, if someone pitched a franchise featuring Moonstar and Cheddar, I’d be queuing up with my ticket money in my hot, sweaty hand!

Other good bits… they got the seventies right!

Good use of props and costume, but me saying that is usually the cue for an expert in the bicycles of 1979 to come along and say it’s totally wrong. One thing which I remember as being accurate — but which looks so wrong now — is that nearly every adult smokes! Back then, I remember having to make sure I had a full packet of fags before settling in to watch a film in the cinema. Another thing I liked were the strong female characters, and the unassuming way it was made clear that girls can enjoy and be good at STEM related subjects; as a father of daughters and grandfather of granddaughters, I like to see that in the media.

All in all, They Reach is a nicely shot and acted little film, but could have benefited from the actual story being tweaked here and there.