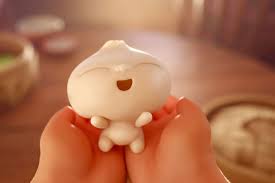 So, let’s talk about that odd and disturbing Pixar movie short before the opening of The Incredibles 2. It’s called Bao, and is intended to be a cute, happy tale. [pullquote]Well, Pixar, you created a new nadir for your work in this one sequence. Your good intentions brought up unsettling innate urges best saved for adult audiences[/pullquote]. Or maybe it would have been better to scrap it and try some less awkward projects. With all the creative scripts Pixar has to choose from, THIS is what they picked. It looks good, but doesn’t feel good. Kind of like eating a bad dumpling? Let’s begin.

We’ve agreed here that little children probably won’t understand Bao; I can’t quite make it make sense either, although for different reasons than a kid might.

We at RunPee suggest you stay out of the theater with your little ones until it’s well over. (That won’t effect the RunPee Timer, since we always start it during the first logo AFTER any shorts.) Our great-niece didn’t get Bao and looked disturbed, but hey little gal, I was a little disturbed myself! And this is a tiny kid who usually*likes* horror! I think the fail in this film is that there was no sensible set-up for what the lonely lady did. It comes as a shock, a queasy revolting payoff.


SPOILERS AHEAD FOR THE PIXAR SHORT BAO

This is a bad choice in so many ways. [pullquote position=”right”]The dumpling was pretty cute before he grew legs and became a a slightly creepy homunculus.[/pullquote]

At least the dumpling was still a cuddly toddler at this point. I can see the empty-nest  lonely elderly lady treating it as her son. Besides, what are the options — eat a squirming and squealing living being? Only Klingons still do that. And Gollum. And carnivorous dinosaurs. (Welcome to my geeky world. Have a cookie….now, back to this short.)

So, I understand empty nesters kind of seeing themselves in this situation. We’ve seen grieving mothers carrying around fake doll babies as therapy. So here’s this lady’s new reason to live, and someone who responds to her affection — who hugs her, loves her, and needs her. Doesn’t matter that is is basically a Golem, made by her own hands. I’m somewhat onboard with this so far. It’s not funny, and most of it will go over kids’ heads, but it might be somewhat cute…although too far plunged into the uncanny valley for others already.

Here’s where it gets weird. (Weirder.) The dumpling becomes a rotten teenager, starts dating, grows a goatee (WT-ever-loving-F!),  leaves his “mother” suddenly, and then returns just as suddenly, with a new fiance in tow, sporting a huge engagement ring.

The mother is frantic and wants her “son” home, now, and for good. She hustles the “hussy”out the door. The dumpling tries to go with her, but the mother captures him and EATS HIM.

Think about this. I totally get it that adults have an innate urge to eat cute things (think of nibbling a baby’s toes, saying “You are so cute I could eat you up!) This strange, off-putting behavior is encoded in the hardwired  area of the human brain. It’s triggered by seeing a certain look — large eyes, big head — and we get a little hit of instinctive recognition.   Selecting for this trait in adult creatures is called Neoteny, and we are are all subjected to a certain constellation of responses to something cute. This article explains the Phenomenon of Cute Aggression, and the unreasoning urge to harm/gobble up cuteness. I found a good video describing it too:

This is rather sophisticated science, melded with deep psychological taboo issues. This would STILL go over most adult heads in the awareness sense. I presume we are supposed to resonate with the urge on some deep animalistic level.

After all, carnivorous animals  — let’s say lions — don’t normally eat their young, and treat them with the fond tolerance that no adult lion receives, because cuteness has special status. Round fluffy heads and huge eyes are code for “Protect me; I am yours.” So, in other words, we are innately draw to protect cuties, married with the disturbing desire to eat or hurt them.

So yes, the lady eats her “son” and should probably seek therapy. But we are intended to get it — to get that by eating him, she could not only keep him home, but metaphorically put him back in the womb/belly, where she can watch over him and keep him safe. I know he would come out as poop in reality, but stay with me for the symbolism. 🙂

Up ’til now we had a few cute baby-toddler dumpling moments, some weird disturbing images of a humunculus dating a human girl, and then the bat-$!tt-crazy image of a momma eating her own son. (Zeus’ father did that once with all his children and look where that left him <—– tangent.)

Bizarre as all this is for a Pixar choice, I still don’t get the ending. Who is the young human man who shows up at momma’s door to introduce his wife? Are these the same people? Was there never a dumpling at all?  Was it all a bad dream, or was she daydreaming about her real son one day, while making the endless morning dumpling breakfasts? What are they trying to say?

Is he a REAL BOY NOW?…nope nope nope, that was Pinocchio.

Was Pixar’s intent to disturb their fan base? I can’t imagine them being so subversive. How did this get a green light? You betcha this short made my Do Not ReWatch List.  (I’ll write about that list some other time.)

Essentially, if you like disturbing elements in your cartoons, you will probably enjoy this more than I did. And in fact, the whole RunPee family is scratching their heads over who made the call to put something so unsettling in front of a huge blockbuster intended for adults and children. Pixar, stick to the stuff you’ve shown unswerving ability to find success in before. (“This is a bad call, Ripley, a bad call.”) If you want to be creative, try it on the smaller Disney releases.

Pixar Short Review: C- (For some good visuals and nice pacing. It looks like the creator was super enthusiastic about whatever their movie short was meant to convey. That keeps it from getting a failing grade.)

I still don’t recommend watching it. But if your curiosity is triggered now, give it a wack before you watch The Incredibles 2. Tell us what you thought of it.

Here is the creator of the dumpling short (Bao):

Read About The Incredibles on RunPee.com:

Incredibles 2 and the Success of Animated Sequels