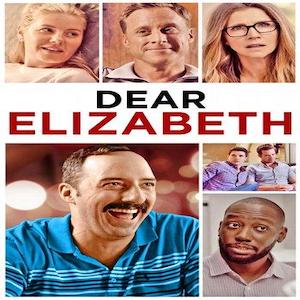 Who amongst us hasn’t had a crush on someone? It might be someone who is actually a part of your daily life or, as in Dear Elizabeth, it could be someone who you can only worship from afar. I have to admit that I have an enormous soft spot for Victoria Coren Mitchell for a variety of reasons; witty, clever, gorgeous, and a world class poker player…my ideal woman! I, however, have had no history with her and am hardly likely to have any in the future. Having said that, if VCM does happen to read this…

Dear Elizabeth is the story of Sid Straw (Tony Hale). He is an amiable but dull chap who becomes co-chair of the planning committee for his college reunion. Unfortunately, all the organisation and publicity is being done via FaceBook and Sid has no social media presence or, consequently, experience. He signs up and is checking things out and realises that one of his college contemporaries was Elizabeth Banks.  This I find hard to believe because if anyone I knew from my earlier life became as famous as Ms Banks then I would be all over that!

Sid’s naivety in the world of social media leads to him making a rather big blunder. He thinks he is sending personal messages to Elizabeth Banks. He is, actually, posting onto her public FaceBook page. This means that he gets a reputation for being an obsessed stalker. Also his attempts to prove that he actually knows her leads him into a “The lady doth protest too much, methinks” scenario where the more he insists, the less he’s believed.

This sets up a domino effect whereby Sid’s life goes into a rapid spiral; he loses his job, reputation, home, car, and even his position on the reunion planning committee. But that’s only the beginning. Obviously the ever present spectre of spoilerdom prevents me from saying much more about how Sid’s life progresses. I’ll just say that things pick up and Sid learns a lot about friendship and family ties. Ultimately, Dear Elizabeth leaves you with a warm glow and a fair few laughs along the way.

Bigger Names Than You Expect

I’ve listed Dear Elizabeth as an independent film but, to be honest, it seemed a lot more like a mainstream offering in terms of casting. Often I’ve been sent films “starring” quite a big name actor only to find that, far from starring, they are in little more than a cameo. However, in Dear Elizabeth we have sizeable appearances from Elisha Cuthbert, Alan Tudyk, Sarah Chalke, Paul Walter Hauser, Lamorne Morris, and Mimi Kennedy.

The production values are top notch. Having said that, there was (I think!) a slight glitch in my copy. At the conclusion of the court case Sid’s lawyer asks if they won. The judge says something but the sound cut out and my lipreading isn’t good enough to make out what she says. Another minor thing is that Dear Elizabeth is the title in the UK and it is listed as being in post-production. However, in North America, it was released in 2020 as Eat Wheaties! That title makes sense once you’ve seen it.