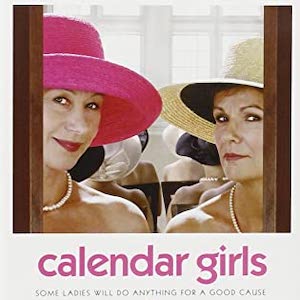 During this autumn I’ve had the pleasure of hosting RunPee Jilly. She had had enough of sunny San Diego and came to stay in wet and windy Wallasey for a bit. This time of year, we’re only allowed forty two minutes of sunshine a day so, as you might guess, we’ve spent a lot of time watching films together. One of the first ones that was picked was the 2003 true life comedy/drama Calendar Girls.

Jilly picked this one because it is a showcase of British (mainly female) talent; a subject about which I have been writing a few articles. The roll call of talent includes Helen Mirren, Julie Walters, Penelope Wilton, Celia Imrie, Geraldine James, Annette Crosbie, Philip Glenister, Ciarán Hinds, John Alderton, George Costigan, and, in his final film appearance, Graham Crowden. They might not all be well known names around the world but, to a Brit of a certain age, they are very well known.

Calendar Girls is a film based on a true story. As is usual, minor changes have been made from reality. For instance, the women in the film come from the fictional town of Knapely whereas the real women came from Rylstone. Also the drama inducing scenes which show the Women’s Institute ruling body being against the production of a nude charity calendar is untrue; they had wide support within the organisation.

Other than that, though, it seems to be fairly accurate. One of the women’s husbands did die of cancer, they did start out raising money to buy a new sofa for the family room in the local hospital, and they did go on to make a lot more money than they dreamt of; so far the project has raised over three million pounds. Incidentally, the real Calendar Girls can be seen as members of the Highgyll WI during the judging of the cookery competition.

Helen Mirren plays Chris, the organiser of the calendar project, Ciarán Hinds is Rod, her husband. Julie Walters is Annie, whose husband, John (John Alderton), is the man who dies of leukaemia. The role of photographer falls to Philip Glenister. The script was by Tim Firth and Juliette Towhidi. Behind the camera was Nigel Cole as director and Ashley Rowe as cinematographer. To be honest, though, the Yorkshire Dales are marvellously photogenic in their own right.

Despite all the success that Calendar Girls garnered, there could have been another version that was even more entertaining. The much missed Victoria Wood was interested in the story after meeting the real-life WI members who created the calendar. She was on the verge of writing the script when Disney acquired the rights. Knowing Victoria Wood, her version would have probably more humour and definitely more nudity!

While a Victoria Wood written version would probably have been funnier that doesn’t mean to say that the Disney version is totally devoid of laughs. There is a gentle humour running throughout Calendar Girls that belies the reason why the events take place. The treatment, decline, and inevitable passing of John are treated sensitively but not mawkishly. The relationship problems are handled briskly and efficiently; just enough to drive the plot along without lowering the spirits.

I knew for sure that this would be a light hearted, fun film. Not because it is listed as a comedy/drama on IMDb but because of who was in it. My earliest memories of Julie Walters, Celia Imrie, Penelope Wilton, John Alderton, and Graham Crowden are all in comedies! They are are all wonderful actors with excellent dramatic and comic timing. And while Helen Mirren is best known for her serious acting she has shown that she can deliver a funny line with the best of them. All in all, a delightfully heart warming and uplifting film.